Lance out for season, Garoppolo leads 49ers past Sehawks 27-7 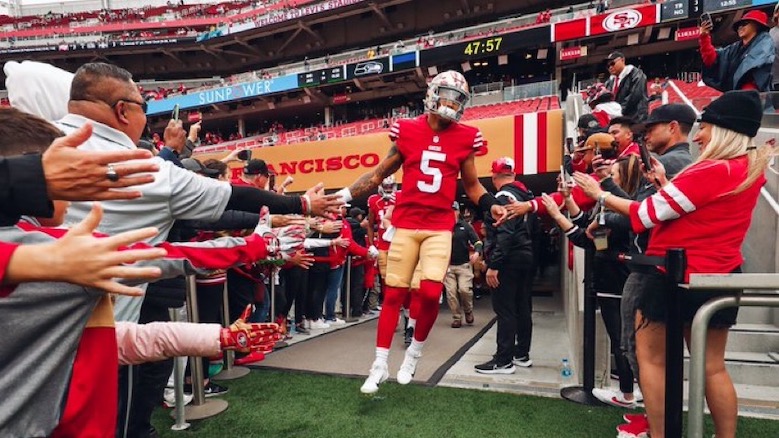 “Surgery was performed at Stanford Hospital and repaired two injuries to Lance’s ankle, a fibula fracture and ligament disruption.  Lance will start the rehab process, and head team physician Dr. Tim McAdams is confident that he will recover completely in time for a full return in the 2023 season.”

SANTA CLARA – Trey Lance was carted off the field in the first quarter with an ankle injury. Backup quarterback Jimmy Garoppolo replaced Lance to lead the 49ers to a 27-7 victory over the Seattle Seahawks in San Francisco’s home opener at Levi’s Stadium.

“Just like riding a bike,” Garoppolo said postgame. “It felt good to be back out there. Feel terrible for Trey. I’ve been on that side of it. This league is tough. That sucks for him.”

With the win, the 49ers (1-1) snapped a four-game losing streak to the Seahawks (1-1) and just earned their fifth win in their last 22 games against their NFC West rivals.

Lance broke his right ankle on the second drive of the game. His injury will require season-ending surgery. He was mobilized in an air cast as he was carted off the field. Lance was named the starting quarterback over Garoppolo in training camp.

49ers head coach Kyle Shanahan confirmed the news that Lance will need surgery and is out for the remainder of the year.

“It’s tough,” Shanahan said. “You feel for someone so bad. It’s a sad moment. But you don’t have time to sit here and think about it. You have to get right back to the game. Guys did a good job at that.”

Lance’s injury opens the door for Garoppolo to reclaim the job that he’s held for the better part of four seasons. Garoppolo completed his first five passes in his first action since the NFC title game loss to the Los Angeles Rams, that included a 38-yard touchdown to tight end Ross Dwelley that put San Francisco up 13-0 early in the second quarter.

By halftime, the 49ers lead ballooned to 20-0 following a 1-yard touchdown run by fullback Kyle Juszczyk.

Seattle got on the board thanks to their special teams when Tariq Woolen blocked a 20-yard field goal attempt by San Francisco’s kicker Robbie Gould. Scooped up by Michael Jackson who returned it 86 yards for a touchdown cutting the 49ers lead to 20-7.

Geno Smith went 24-for-30 for 198 yards and an interception. The Seahawks ran a trick play near San Francisco’s goal line that led to another interception.

DeeJay Dallas took a handoff following a direct snap to rookie running back Kenneth Walker III and tried to force a pass to DK Metcalf, but Charvarious Ward made the big defensive play. San Francisco forced three turnovers and held Seattle to 35 rushing yards on the day.

The Seahawks finished with just 216 yards of total offense. Tyler Lockett was the lone bright spot for Seattle’s offense, finishing with nine catches for 107 yards.

Garoppolo put the game out of reach late in the fourth quarter on a 1-yard score. For the game, Garoppolo finished 13-of-21 for 154 yards and two touchdowns (1 passing and 1 rushing).

“I’m comfortable here,” said Garoppolo. “The players, the scheme, all that stuff, the locker room. It’s comfortable. I’m familiar with it. I’m not saying I knew this was going to happen [injury to Trey], but I was ready for this in case this happened.”

Brandon Aiyuk and Deebo Samuel hauled in five catches each, with Aiyuk leading the team with 63 receiving yards. Samuel finished with 97 total yards from scrimmage (44 rushing and 53 receiving).

Next up for the San Francisco, a trip to Denver to take on the Broncos and longtime nemesis Russell Wilson in Week 3. Primetime on NBC’s Sunday Night Football.

Seattle will host the Atlanta Falcons at Lumen Field next Sunday.