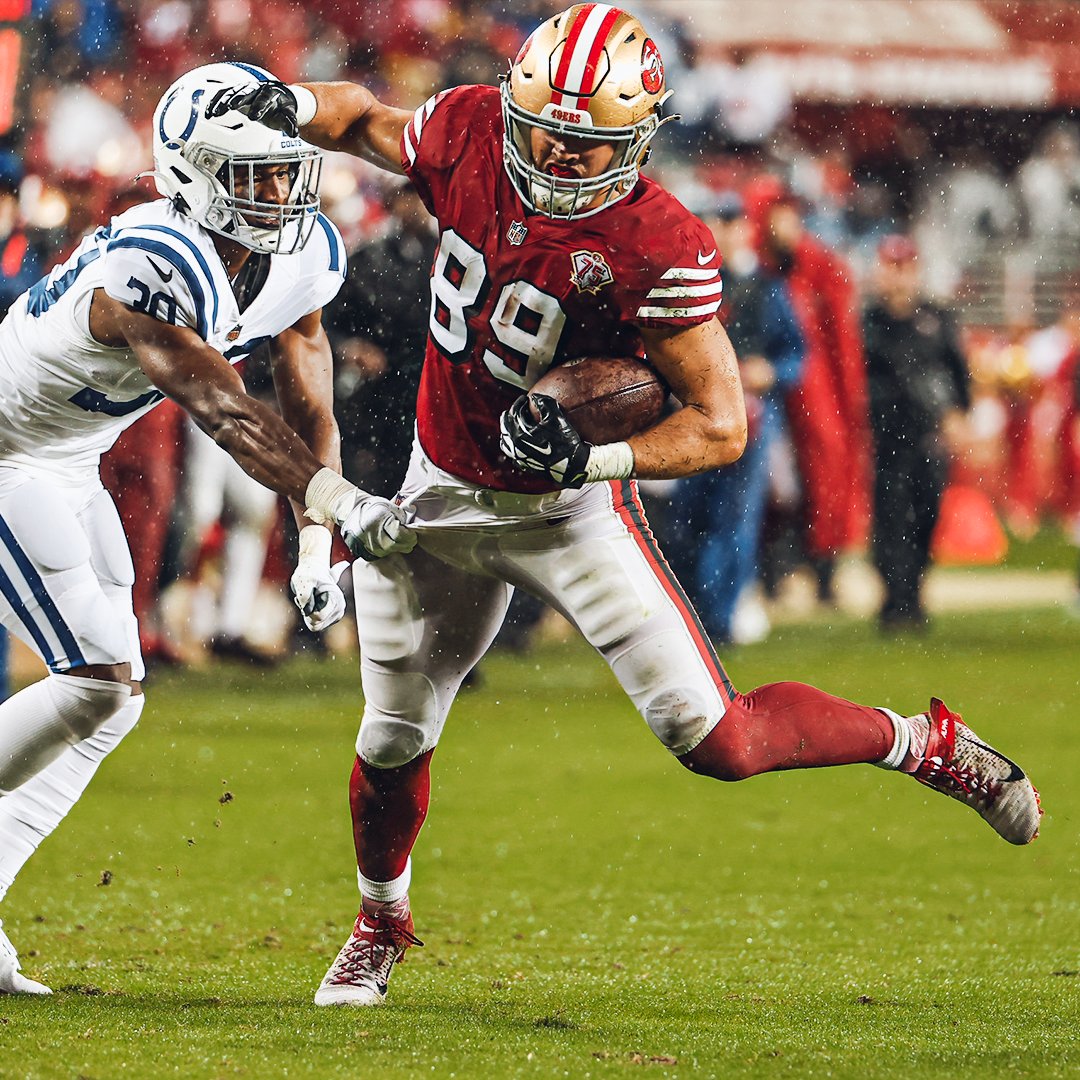 Santa Clara –  Despite the heavy rain throughout the Bay Area, the 49ers got off to a great start. Rookie Elijah Mitchell rushed for a 14-yard touchdown on opening drive. He had 5 carries for 57 yards on that drive. Joey Slye kicked two field goal for 34 and 56 yard to give San Francisco an early 12-7 lead in the first quarter.

“It’s pretty down in there right now,” said Kyle Shanahan. “Losing four games in a row, it’s been a month. That’s tough. It was tough, really the last two weeks, losing three in a row. We just added another to it. Doesn’t make it any easier. We got guys with high character in there. I think we’ve got good enough football players. We have to handle whatever we’re going to get and come back and play better next week versus Chicago.”

Carson Wentz threw two touchdown passes and scrambled for another. he went 17-for-26 for 150 yards. Jimmy Garoppolo who return form the injured list didn’t have his best game. he went 16-for-27 for 181 yards with one touchdown and two interceptions.

Wentz went deep to Michael Pittman Jr. for 57 yards, that setup Wentz to connect with Mo Ali-Cox for an 11-yard touchdown to put the Indianapolis on the board. With a minute left in the first, Jonathan Taylor broke through the 49ers defense for a 33 yard run, Jimmy Ward made the tackle to save the touchdown.

“We’re not doing good enough,” Shanahan said. “It’s been a struggle all year. Today was the worst. It’s always harder getting your footing out there and stuff, but it is for them also. Until the end, until they started making some of those, we gave them way too many explosive freebies, especially the two touchdown drives in the first half.

By the start of the second quarter, San Francisco’s defense stayed the course. Nick Bosa made great defensive play on Wentz who practically handed the ball to Azeez Al-Shaair for the interception. A terrible turnover by Wentz, whose pass was intended for Zach Pascal.

While the heavy rain continued to cause both quarterbacks to struggle on offense. Garoppolo connected with Deebo Samuel for 10 yards, but Darius Leonard punched the ball out for the fumble. That led to Wentz’s 1-yard touchdown, he outran Jaquiski Tartt and Emmanuel Mosley into the end zone for the touchdown. The Colts tried for the two-point conversion but failed. So, the first half ended with Indianapolis up 13-12 over the 49ers.

“I’m not too sure exactly,” said Garoppolo. “I got to go back and look at the film. I think the weather played a little bit of a role, started to pick up there a little bit. But we just didn’t execute. I think it was too many mistakes stacked on top of each other. One guy would make a mistake here, one there. You can’t do that and win football games consistently. I think we’ve just got to get back to the drawing board. We can’t make this many mistakes back to back like that.”

By the fourth, Garoppolo and his offense bounced back with three plays. Garoppolo went deep to Samuel for a 29 yard pass. The he connected with Charlie Woerner for 27 yards. Garoppolo went back to Samuel for a 14-yard touchdown pass to make it a 20-18 game. The 49ers went for the two-point conversion but the ball was blocked to end the play. An impressive drive with 3 plays in 71 seconds.

Michael Badgley kicked a 42 yard field goal to increase Indianapolis lead 23-18. If things couldn’t get worse for San Francisco, Garoppolo’s short pass intended for Samuel was intercepted by Xavier Rhodes who left the game earlier limping only to return for the crucial play. Wentz then went deep to Pittman for a 28-yard touchdown to make it a 30-18 game.

“They had a good balance of run and pass and had a couple of actions in there,” CB Josh Norman said. “Like I said, we just have to be better at executing our assignments that’s being asked of us. I know I have to do a better job at certain plays that I noticed coming. I think in secondary as a whole, understanding what is asked of us, coaches put [us] in positions, we just have to make plays. That’s what it comes down to. But the beauty of it, we have the guys in the room to do it and if not, we wouldn’t be here.  So that’s a good thing knowing that that’s the silver lining you take from it because looking outside, nobody’s coming to help us. It’s all about us and what we do. Drive the bus from the back. So we just have to be better and we will. We have the coaching staff to do it, definitely got players. So I’m just waiting on that break.”

“Yeah, I mean, we came out told coach [Indianapolis Colts Head Coach Frank Reich], ‘Hey, shot’s there, we’re going to throw it.’ We got the guys, we got the playmakers, specifically Pittman,” said Wentz. “Even if it’s under thrown or whatever, I just got to give him a chance. He made a couple big plays and had the PI on the other one. We said let’s still be aggressive and not let the weather completely change who we are. Be smart. Pick and choose our opportunities, but I really appreciate coach still trusting us to call those plays and create some big plays.”

At the 2-minute warning, Garoppolo tossed the ball high up in the air to a bunch of white shirts for the interception. That was the nail in the coffin. The 49ers watched the clock run out before heading to the locker room. San Francisco will head to Chicago to take on the Bears next Sunday.

“Yeah, that one I didn’t get on top of it, didn’t finish the throw so it sailed,” Garoppolo said on his final interception. “I don’t know, just the whole night. It’s tough playing in that weather to begin with, just the mental toughness you have to have. But then when things are going wrong like that, it makes for a tough night. It was very frustrating, but we’re going to stick together. We’ve got a team that, we do have play-makers. We’ve got players, got good coaches. We’ve got to stick together at this point.”

49ers explode on offense for 1st home win in over a year November 15, 2021
Previous Post Curry scores 45 in Warriors home opener
Next Post Warriors improve to 5-1 with win over OKC Thunder