49ers look ahead to the offseason, team awards given out 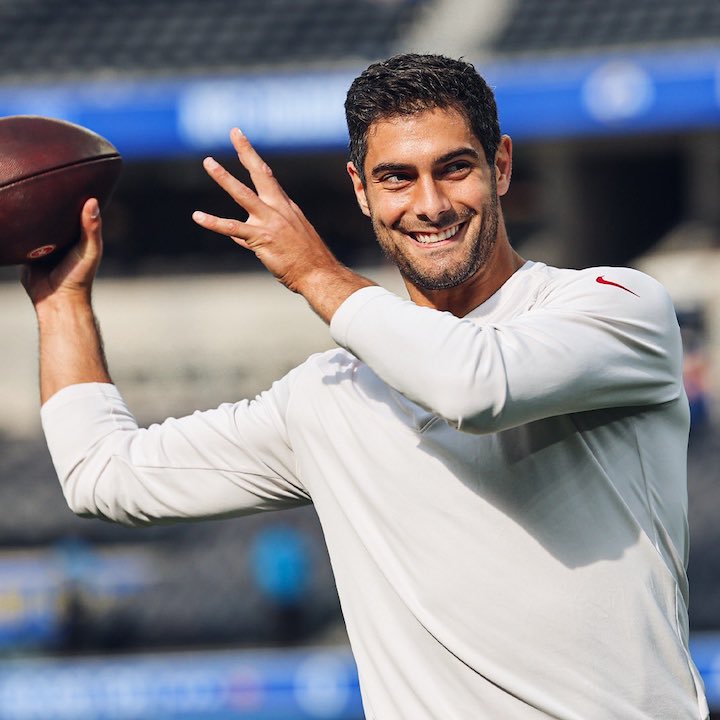 “I think more will happen in the days that come, but yeah, these guys have been very upfront about the whole thing” Garoppolo said. “I was talking to John yesterday just about finding the right destination and whatever the future holds just doing it the right way. I’ve got a long career ahead of me. So I’m excited about it. I’m excited about the opportunities to come. I just want to go to a place where they want to win. I mean, that’s really what I’m in this game for. I’m here to play football here, to win football games. And as long as I’ve got that and good people around me, I think the rest will take care of itself.

You know, I’ll never close every door completely. I think there’s a possibility of anything. I think just, we need to have those conversations here in the next couple days, next couple weeks and really get the ball rolling on that. I’ve had a great time here with the Niners organization, with the Faithful, everything here has been awesome. Been some ups and downs obviously, but yeah, I mean, we’ll see what happens, I guess.”

“We’re handling the thumb actually in the next couple days,” explained Garoppolo. “We’re going to see a specialist, see what he thinks of the whole situation, get a couple of opinions. If I could avoid surgery, that’s really what I’m hoping for. But, we’ll see. This arm’s been through a lot this last month, so got to get this figured out first.”

“Faithful, thank you very much for everything. It’s been crazy, man. Just all the comebacks at Levi’s, comebacks on the road, ups and downs. It’s been a hell of a ride guys. I love you guys.”

“No one wants to face the reality that this thing may be ending,” said Lynch. “This was a ride that had so many different turns in it. And I think it was special just to be able to sit down with Jimmy and let him know how appreciative we are as an organization of the way he handled everything, the way he played, the toughness that he exhibited and just expressed my admiration for him and the way he handled everything this season and during his time with us.

The commitment was just that we’re going to communicate, as we always have. And we’re going to be completely upfront and honest and that Kyle and I, right now it’s an evaluation stage. The season just ended so, we’ve got we’ve got a lot to think about, with our team in general and certainly at that position. And the commitment was just that everything we do will be communicated in a very straightforward manner as I think we’ve always done with him.”

“Same as John, if we knew exactly what was happening, we would’ve told Jimmy,” said Shanahan. “But this season just ended and we’ve got a great young quarterback who was a rookie and we have a great quarterback here who’s a veteran. We’ve had Jimmy here for five years and he’s got to play in two of those seasons fully. Before this year, it was only one out of four years, and that was our big worry going into it, that we could not go into another year where he didn’t make it through. I think he only missed one game this year, the two years he’s played, he’s taken us to a Super Bowl and he’s taken us really close in NFC Championship Game.

I’ve got the ultimate respect for Jimmy, and I’m very excited about [QB] Trey [Lance]. Jimmy’s made it a lot harder, because he stayed healthy and he played like he is capable of playing, which is to me one of the better quarterbacks in this league. So we’re in a tough situation, not a tough situation, a situation where you have to make some tough decisions that won’t be easy, but I’m happy about that. That means you’ve got the best scenario going, and that’s why we have put a lot of thought into this. John and I talking to [CEO] Jed [York] and Jimmy will know everything as we go.”

While the 49ers season ended earlier than they wanted, the team will head into the offseason unsure of what the roster will look like next year. Jimmy Garoppolo’s future is uncertain, while the trade deadline looms, he can be traded or the 49ers can work out the terms of his contract before the trade deadline March 16.

Nick Bosa wants to take his workouts to the next level since he’s completed a full season.

Trey Lance wants to be better for nest season, he thanked his best buddy, Garoppolo for mentoring him this season. If Garoppolo does not return next season, Lance will be the new face of the franchise.

He’s going to be one of my best friends for my whole entire life.”

While Lance has made a lasting impression on the 49ers fan base throughout the season, his teammates have also noticed how good he can be.

“You know he can throw a football,” said Jimmie Ward today at the teams press conference. “He’s got a lot of power in his arm. We know he’s an athlete, he’s very athletic. He likes to move around in the pocket to throw the ball, extend downs. Some of the stuff that you see Jimmy doing from time to time, you see Patrick Mahomes doing, you see Kyler Murray doing, you see Aaron Rodgers doing, yeah, he has that. He’s a competitor.”

“Definitely very talented and doesn’t seem to get rattled,” Arik Armstead said. “I’m excited for his future and his career. I can’t wait to see what he does. I’m sure everyone’s excited and ready to see it. I’m a big, big fan of his. It’s been great getting to know him this year. He’s been a great rookie, coming in as a young guy, not talking too much, learning and trying to figure out what his career’s going to look like in the NFL.”

The Len Eshmont Award is voted on by the players and is given to the 49er who best exemplifies the inspirational and courageous play of Len Eshmont, an original member of the 1946 49ers team. Eshmont, who coached at Navy and Virginia following his career in San Francisco, died in 1957. The award was established that year.

The Bill Walsh Award was established in 2004 in honor of San Francisco’s Hall of Fame Head Coach. The award, which is voted on by the coaching staff, is given to the 49er who has best represented the standard of professional excellence established by Walsh. Walsh served as the team’s head coach for 10 seasons from 1979-88. In that time, he compiled a record of 102-63-1 and led the team to three Super Bowls. He was twice named Coach of the Year (1981, 1984) and was later named Coach of the Decade for the 1980s.

The Hazeltine Iron Man Award is named for former linebacker Matt Hazeltine, a 13-year performer who played more seasons at linebacker than any other 49ers player. Known for his durability and dedication, Hazeltine passed away in 1987 from ALS, and Bill Walsh established the award in his honor that year. The award is given annually to the most courageous and inspirational defensive player as voted upon by the defensive coaches.

Thomas Herrion Memorial Award was established in 2005 by 49ers owners Denise and John York and is presented to a rookie or first-year player who best represents the dream of Thomas Herrion. The recipient has taken advantage of every opportunity, turned it into a positive situation and made their dream turn into a reality. The award is voted on by the coaches.

The Ed Block Courage Award is named after Ed Block, the former head athletic trainer of the Baltimore Colts of 23 years. Block was a pioneer in his profession and a respected humanitarian whose most passionate cause was helping children of abuse. The award is presented in his name each year to the player that exemplified a commitment to sportsmanship and courage. Ed Block Courage Award winners from each of the 32 NFL teams are honored at a banquet in Baltimore, MD. All proceeds from the event benefit the Ed Block Courage Award Foundation’s Courage House National Support Network. Named after the NFL team in a respective NFL city, a Courage House is a facility that provides support and quality care for abused children and their families in that community. The 49ers dedicated their Courage House in October 2003 at the Edgewood House in San Francisco.

The Perry/Yonamine Award is presented to the 49ers player who exhibits an exceptional commitment to promoting unity within the team and in their community. The Perry/Yonamine Unity Award is named for the former 49ers players and pioneers of unity and diversity, Joe “The Jet” Perry and Wally Yonamine, and is voted on by the players.

The San Francisco 49ers returned to in-person community service in 2021, providing approximately 300 hours of community service to the Bay Area. Top participants and winners of the Community Relations Service Awards were LB Azeez Al-Shaair and WR Trent Sherfield with this season’s veteran player awards, and QB Trey Lance and OL Aaron Banks with the rookie player awards. TE George Kittle won the 49ers NFL Salute to Service Award for the first time in his career. Dana McLemore was presented with the alumnus award.

The Walter Payton Man of the Year Award, named after the late Hall of Fame running back of the Chicago Bears, is given annually to the player who best exemplifies a commitment to philanthropy and community involvement.

The Garry Niver Award is presented annually by the San Francisco Chapter of the Pro Football Writers of America to a 49ers’ player for his cooperation and professional style in helping the pro football writers do their jobs. The award is named after pro football writer, Garry Niver, who was a long-time beat writer who covered the 49ers for the San Mateo Times.