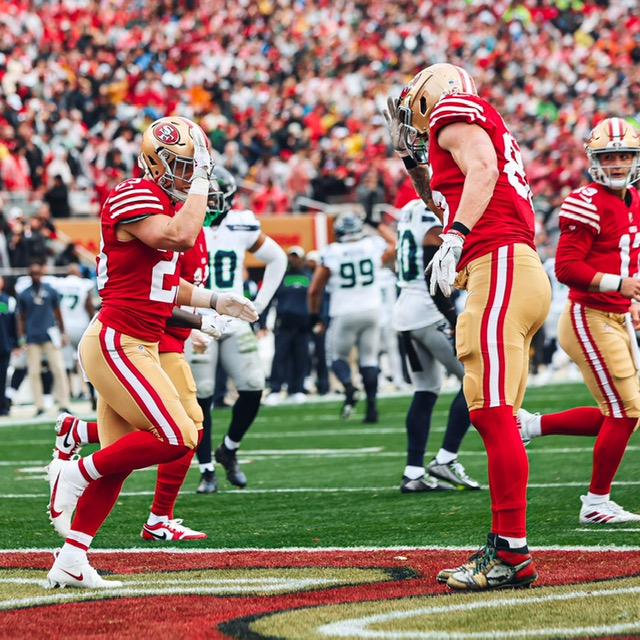 Santa Clara – On a gloomy rainy day, the Niners continued their winning streak well into the playoffs. After a competitive start, the 49ers out dueled the Seattle Seahawks 41-23 in the the wild card game. The Niners advance to the division round of the playoffs where they will host a team yet to be determined at Levi’s Stadium.

“There’s more on the line,” said Christian McCaffrey. “It’s win or go home in the tournament, but the way this team prepares and practices, it’s very similar to every week since I’ve been here.”

San Francisco’s top rated defense denied the Seahawks any opportunity to score in the second half. Gino Smith went 25-for-35 for 253 yards that included two touchdown and one interception. Smith had two the the only two turnovers in the game, he was sacked three times by Arik Armstead and twice by Charles Omenihu who forced him to fumble.

“When the opponent gets in the red zone, your thought process is to hold them to a field goal,” Omenihu said. “The plan is always play the call and execute It’s as simple as that. When we do that good things will happen for us.”

“Oh, it was huge,” said 49ers head coach Kyle Shanahan on Omenihu forced fumble. “That was our first turnover. Once we got the turnover that’s when I feel like the momentum completely changed for the whole game and it took him a while. He was in that pocket for a little bit.”

The Niners offense racked up 505 yards of offense, marking the 3rd time in franchise history that the team registered 500-or-more yds. in a playoff game [579 yds. vs. GB (1/12/13) & 537 yds. at Miami. (1/20/85)]. Purdy took flight when he scrambled for a 1-yard touchdown in the third quarter. He then connected with Elijah Mitchell for a 7-yard touchdown and Deebo Samuel 74-yard touchdown in the fourth quarter.

Samuel had three carries last week, his first game back since returning from the injured list. Today Samuel had 133 receiving yards on 6 carries that included a 74-yard touchdown pass from Purdy. His 74-yd recept. was the 2nd longest in franchise postseason history and the longest since 1/5/2003. Samuel registered 100-or-more rec. yds. in a postseason game for the first time in his career. He is the first member of the 49ers to do so since WR Anquan Boldin [136 yds. at Car. (1/12/14)].

“I saw Brandon. Once I came around and I saw the safety up top and I wanted him to think I was going to go that way, when I knew Brandon was going to seal the sideline for me and he did a great job and I just ran off his block,” Samuel said on his touchdown.

San Francisco improved to 1-1 against Seattle in the postseason and have now reached the Divisional Round of the Playoffs for the 3rd time in 4 seasons. The 49ers improved to 6-2 all-time in the Wild Card Round, including a 4-0 mark at home. With so many weapons on offense, everyone got involved. McCaffrey had 119 rushing yards and a 3-yard touchdown in the first quarter. He also had a 68-yd. carry which was the 3rd longest run in franchise postseason history and the longest since 1/8/89.

Robbie Gould kicked four field goals for 34, 33, 46 and 31 yards. He remains a perfect 25 of 25 on FGs and 38 of 38 on PATs in his postseason career. Gould’s 4 FGM are the match the most by a member of the 49ers in a single postseason game in franchise history. Gould’s 25 FGM without a miss is the most in NFL history.

The Seahawks didn’t give up despite a smothering defense. Smith’s pass intended for Tyler Lockett was intercepted by Deommodore LeNoir. His interception marked the first of his postseason career. After the two-minute warning Smith found Metcalf for a 3-yard touchdown. But at that point the game was already decided as the 49ers look ahead to their next opponent that could be either the Minnesota Vikings, Dallas Cowboys or Tampa Bay Buccaneers.

“I think every game we learn something, every practice we learn something and there’s a standard of being a professional in this locker room and with our coaching staff that you have to keep adjusting and keep improving,” said Mike McGlinchey. “There’s an old football adage, you’re either getting better or you’re getting worse, there’s no staying the same. I think we take that to heart around here and I think offensively, we’re starting to catch our stride and playing our best football at the right time.” 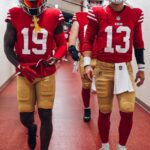 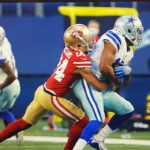