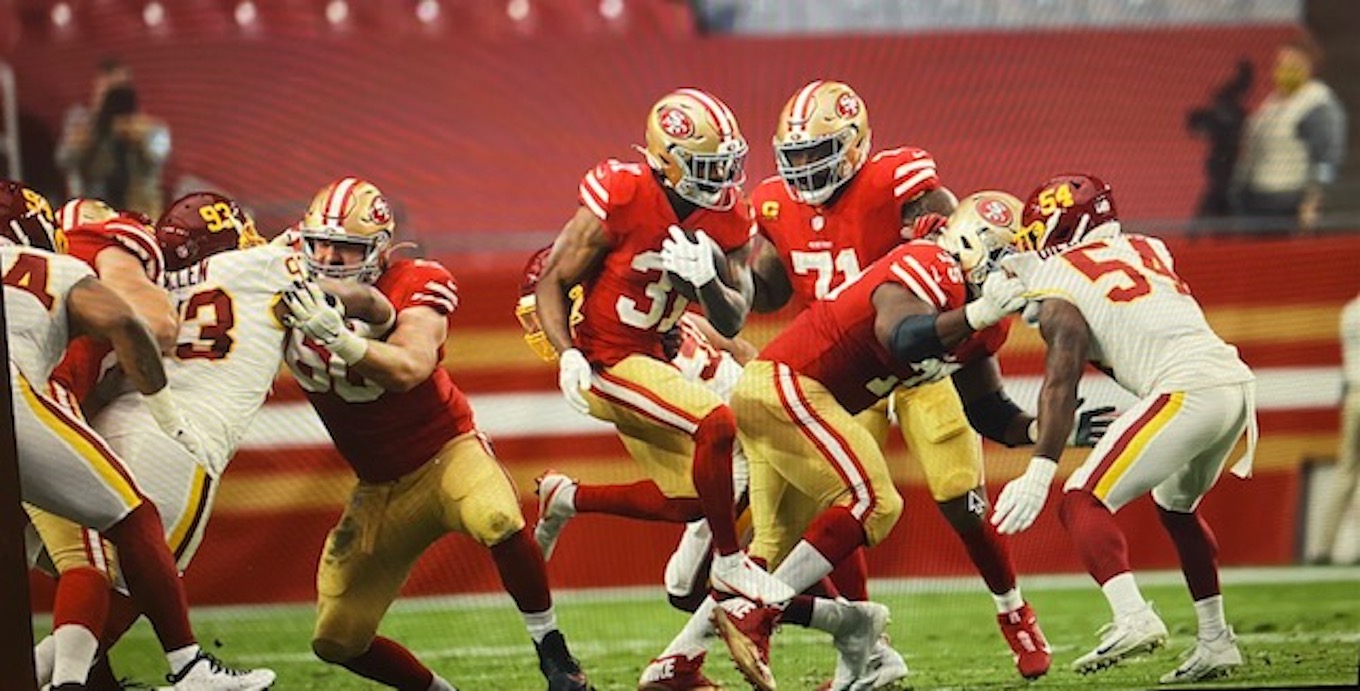 Arizona – In a must win for both teams, the 49ers failed to get their offense going.  Nick Mullens and his offensive line struggled from start to finish.  Three turnovers resulted in seventeen points was not ideal for a team whose still in the hunt for the playoffs.  Head coach Kyle Shanahan said after last weeks loss to the Buffalo Bills that every game was a must win.

“Extremely disappointing, the way our defense played against their offense we had a very good chance to win,” Shanahan said.  “For us to turn the ball over three times and get 17 points off of it too was borderline the back breaker.”

Washington’s 23-15 win over San Francisco moved them to the top of the NFC East.  As for the 49ers their playoff run looks dim.  The defense did a great job keeping Washington off the board in the first quarter while they took an early lead when Jeff Wilson Jr. scored a 1-yard touchdown.

Mullens found Brandon Aiyuk for 17 yards, to setup Wilson’s touchdown.  But after that the offense fell apart.  By the second Dustin Hopkins kicked a 51-yard field goal to make it a 7-3 game.  After San Francisco got the ball back, DE rookie Chase Young forced Wilson to fumble and Washington took over.  But the 49ers defense made enough stops to send Hopkins out to kick a 31-yard filed goal.

The short time he was in, Alex Smith went deep to Cam Sims but Jason Verrett leaped in front for the interception with 1:47 left in the first half.  On the next play, Mullens was sacked and had the ball stripped by DT Daron Payne.  Young recovered the ball to rush for the 47-yard touchdown to extend their lead 13-7.

“It’s very frustrating, you don’t want to have those turnovers,” Raheem Mostert said.  “For us to go out there and the defense did an unbelievable job, 1. Stopping the offense and holding them under so many yards.  And 2. Getting some turnovers so we can get the ball back.  When you turn the ball over and get 17 points right away, without the defense making a stop other than that field goal, it’s a little more pressure on us.  That’s something we have to focus on throughout practice this week and minimize those turnovers.”

Washington continued to dominate in the second half.  Hopkins kicked a 21-yard field goal.  Mullens short pass intended for Kyle Juszczyk was intercepted by SS Kameron Curl who ran it back for a 76-yard touchdown making it a 23-7 game.  San Francisco couldn’t get their offense going while Mullens and his offensive line struggled the entire game.

“I did have thoughts of pulling him [Nick] after the pick 6,” said Shanahan.  “I wanted to give CJ a chance to warm up.  During the next drive, Nick made some big third downs and we went down there and scored.  After he took us on a scoring drive, I changed my mind.”

Early in the fourth Mullens short pass to Juszczyk for a 6-yard touchdown cut the lead to 23-13.  Mullens then found Bourne for the two-point conversion to make it a 23-15 game.  But that wasn’t enough to stop Washington, their defense kept the 49ers off the board despite losing several players to injuries.

·       The 49ers defense held the Washington Football Team to 193 total net yds. Marking    the fewest net yds. allowed by the team this season.

·       The 49ers defense held the Washington Football Team to 12 total 1st downs, the fewest allowed by the team this season.

·       CB Jason Verrett intercepted Washington Football Team QB Alex Smith late in the 1st half, marking his 2nd INT of the season and 7th of his career.

“The San Francisco 49ers today were informed that offensive line coach John Benton has tested positive for COVID-19 and will not attend today’s game. His duties will be absorbed by the offensive coaching staff.

“Benton immediately went into self-quarantine and the team conducted the appropriate contact tracing as part of the NFL’s intensive COVID-19 protocol. We will continue to communicate with the League and medical professionals and take the necessary precautions in the best interest of health and safety.”