49ers injury update for this week 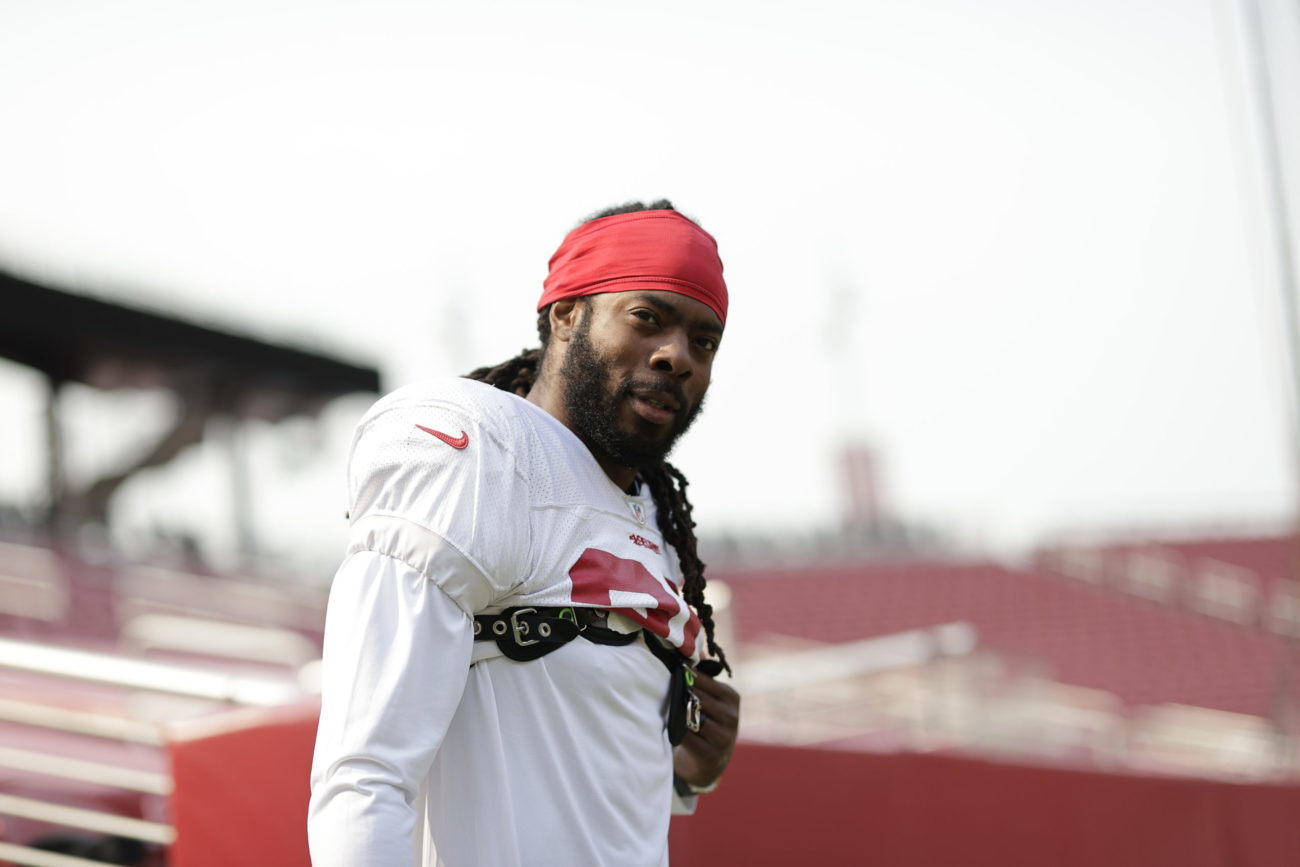 Santa Clara – Injuries continue to plaque the 49ers, after Week One a few key players were out of practice on Wednesday.  Veteran player Richard Sherman was added to the Injured Reserve List with a calf injury.  The loss of Sherman is a huge hit to the defense, leaving only three active cornerbacks on the active roster, Emmanuel Moseley, Ahkello Witherspoon and K’Waun Williams.

Also out of practice today were WR Richie James with a hamstring, TE George Kittle, knee sprain, CB Jason Verrett hamstring and Ahkello is currently in concussion protocol from Sunday’s game.  The 49ers promoted CB Dontae Johnson to the active roster from the teams’s practice squad and signed CB Ken Webster from the Miami Dolphins practice squad to a one-year deal.

“We were still waiting on it Monday,” said Kyle Shanahan rearing Sherman’s injury.  “It happened like the last four plays of the game, I believe.  I think Spoon came in when they were kneeling the ball.  They ran it a couple of times, then kneeled it out.  That’s when Sherm was done, I think it was the series before that.  We were still waiting to see how it felt on Monday and later Monday afternoon we found that it was hurting a little more than he expected.  Fortunately, we were able to do the IR to return. So, hopefully won’t be too long.”

Sherman is eligible to be designated for return following the team’s fourth game of the season.  Another blow this week is Kittle being ruled out for Week Two against the Jets on Sunday.  Shanahan mentioned there was a possibility that Kittle maybe out and confirmed Friday during his press conference that he will miss Sunday’s game.

“I think if it was just the normal person, we would have ruled him out earlier in the week but we never do that with George because of what he’s shown us here over these three years with him,” Shanahan said.  “We would have held out two more days to wait and see if it was a home game but with us having to travel today we had to decide whether it was worth it to bring him.

We had to make that decision a little bit earlier today and that’ll help him and benefit him and he’ll meet us in West Virginia and hopefully these two days staying here will help him.  Hopefully he’ll be ready to go next week.””

The 49ers today (Friday) announced they have signed WR Mohamed Sanu to a one-year deal. In order to make room on the roster, the team placed WR Richie James on the Injured Reserve List. James is eligible to be designated for return following the team’s fourth game of the season.

Sanu (6-2, 210) was originally drafted by the Cincinnati Bengals in the third round (83rd overall) of the 2012 NFL Draft. Throughout his eight-year career with the Bengals (2012-15), Atlanta Falcons (2016-19) and New England Patriots (2019), he has appeared in 118 games (92 starts) and registered 403 receptions for 4,507 yards and 26 touchdowns to go along with 41 carries for 223 yards and two touchdowns on the ground and completed seven of eight passing attempts for 233 yards and four touchdowns through the air. He has also appeared in nine postseason games (eight starts) and added 26 receptions for 318 yards and two touchdowns.

In 2019, Sanu appeared in seven games (six starts) with the Falcons where he registered 33 receptions for 313 yards and one touchdown prior to being traded to the New England Patriots on October 23, 2019. He went on to appear in eight games (six starts) and finish with 26 receptions for 207 yards and one touchdown for New England. He spent this year’s training camp with the Patriots prior to his release from the team on September 3, 2020.