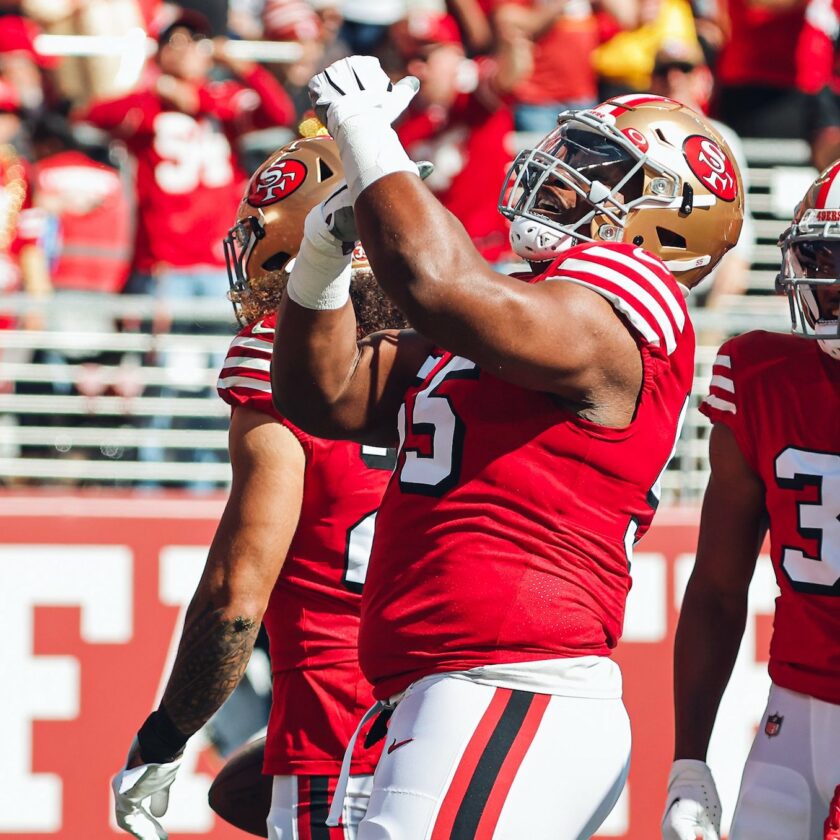 Santa Clara – In their second meeting, the Kansas City Chiefs dominated the 49ers especially in the second half. They scored five times and completely dismantled San Francisco’s defense. Mecole Hardman made history by being the only wide receiver in a Super Bowl era with two or more rushing touchdowns and one or more receiving touchdowns in a single game.

“I think we made some mistakes, including myself in the first half,” said DL Nick Bosa. “That allowed them to stay on the field and when you don’t force them to get into those passing situations, you kind of let them fall forward and get those four or five yard runs. We knew that it was going to be a game that the D-line had to be the major run stopping because our guys in the back end obviously have to deal with what they do in the air. So, we just didn’t play good enough as a D-line.”

The Chiefs 44-23 win over the 49ers was definitely nothing similar to when these two teams met last in the Super Bowl back in 2020. Kansas City walked away winning the championship while San Francisco still can’t figure out how to best this team. Patrick Mahomes went 25-for-34 for 423 yards and three touchdowns. Hardman was responsible for three which included two on the ground and one receiving.

“You know that’s a good team,” 49ers head coach Kyle Shanahan said. “You know they’re going to make some big plays, but I thought the most frustrating thing was the spots we hurt ourselves. In that first half, some of the false starts that we had on offense, lining up in the neutral zone on defense.

For us to have that false start on the field goal, I was obviously so excited because they muffed the punt the next time, but for us to have a turnover there was a real big mistake. Ended up being alright when they missed that field goal. We talked about some of that stuff at halftime. We come out, give up a huge kick return and then have a really stupid penalty to add 15 yards at the end of it. Those are the things that disappoint me the most.”

San Francisco did made crucial mistakes early, unable to get into the end zone on opening drive Robbie Gould kicked a 30-yard field goal for an early 3-0 lead. Mahomes’ pass intended for Skyy Moore was intercepted by Talanoa Hufanga. That led to Jimmy Garoppolo connecting with Ray Ray McCloud for an 8-yard touchdown. The 49ers extended their lead 10-0 on two back-to-back scoring drives.

After that San Francisco struggled on offense, they couldn’t get past third down. Gould kicked the next two field goals for 50 and 49 yards. George Kittle caught a 15-yard touchdown pass from Garoppolo early in the fourth to make it a 28-23 game. Down by 5 points, the 49ers failed to make stops to prevent Kansas City from scoring three more times. Garoppolo was sacked in the end zone for a Safety. And Mahomes connected with JuJu Smith-Schuster for a 45-yard touchdown to end the game. Smith-Schuster recorded two touchdowns today.

“I think it’s the hard work we’re putting in,” said Smith-Schuster. “It’s the chemistry. [Kansas City Chiefs QB] Patrick [Mahomes], you know, getting to trust all of us and putting the ball where it needs to be for us to go out and make the play. As you can see today, two tight ends, three tight ends catching balls, receivers catching balls, [WR] Mecole [Hardman] scores, I scored, and just spreading the ball around. Then, when your number is called, making plays.”

Hufangaregistered 4 tackles and intercepted Chiefs QB Patrick Mahomes. The interception marked his 3rd of the season. Hufanga is the first member of the 49ers to have 3-or-more INTs through the first 7 games of a season since CB Richard Sherman in 2019 (3 INTs).

“I just feel like we came out with some good juice,” CB Charvarius Ward said. “We just didn’t keep it up, we just didn’t maintain it. They started to make some plays and we stopped making plays. That’s what it was. They were making plays and we weren’t making plays. Got to have better energy, better eyes, better techniques. We just played a sloppy game on defense. We can’t do that.”

McCaffrey to see action against Rams

Christian McCaffrey traded to the 49ers from the Carolina Panthers earlier this week and General Manager John Lynch took questions from the media:

“Obviously, we’re in our preparation for the Chiefs, so that’s really where our focus is right now because they deserve that. They’re an excellent football team and as formidable of an opponent as it gets, but you have to strike when the opportunity is there and I can’t tell you how excited we are too have landed [RB] Christian McCaffrey as part of our team.

We’ve been working on it for some time and it all came to fruition last night. It did take a lot to get him, but I think he’s worthy of that. He’s that kind of player. The previous time we made a big splash like this was [former San Francisco 49ers WR] Emmanuel Sanders back in ’19 because we felt like we had the team capable of competing for the whole deal. We’re 3-3 now, I think we were 6-0 when we did that, but we’re 3-3 now so we understand we have a lot of work to do, this isn’t a magic pill. It’s not going to fix all of our ills as a team, one player. We’ve all got to get better, but we still very much believe in this team and that’s why we took a swing at an excellent football player.”

Did these conversations start when you were in Carolina?

“They started at The Greenbrier after we had played them. I had seen [Carolina Panthers GM] Scott [Fitterer] in person at the Carolina game and said let’s catch up this week. We were at off The Greenbrier, we started having conversations. You really are just trying to gather information, is he available, if so, what’s the ballpark of what it’s going to take. You want to keep these things quiet in all facets of the organization, the analytics, contracts, we look at it from every aspect and everything just seemed to align that it was a really good fit, and we all appreciated his game.”

He played about 86% of the snaps against you in Week Five, which is typical for him. Was mileage a concern and is mileage going forward a concern? Did you discuss capping his snaps or anything like that moving forward?

“No, we discussed it all. First of all, you have to look at his history coming out of Stanford, really a pristine health record. The last couple of years have been rough, but it really felt like this year he had reestablished that health. I’ve been there in my own career. I started off and struggled to stay on the field than went eight, nine years without missing a game. Sometimes there’s those ebbs and flows. This guy has played a lot of football this year, really good football throughout his career and he’s an extremely versatile player. He’s an explosive football player, he’s a smart football guy. I can go on and on. He checks all the boxes.”

How significant was it to give away those draft picks that can be used to bolster the defensive line or the secondary where you’ve had some injury issues?

“I think we really tried to build this thing the right way. We value picks. I think there’s a belief that some people don’t value picks. We certainly value our picks and I think that’s why we could entertain doing something like this. We have a lot of our core locked up, that’s not to say you don’t have holes that you have to fill from year to year. It’s really hard to part with draft picks because I like our process and I like our ability to identify people that fit with us, but when you have an opportunity at a player like this, that’s what we had to challenge ourselves with and we did and ultimately we said, let’s try to make it happen.”

You still have picks, just not in the first and second round. How much does the success of your process, your scouting department finding those gems in the later rounds, how much did that buoy your confidence to move forward without those early round picks?

“That’s the thing. After practice today, we’ll get on a Zoom with all our college scouts and just this morning trying to anticipate, are they excited, are they bummed because here goes all their guys. My message is going to be, this is all the more reason we have to make these picks count. We’re fortunate that some different avenues, minority coaches that brought us some picks. I think that empowers you to do something like this because you have a couple of comp threes, and you’ll get more in the future with things of that nature. But ultimately, you weigh everything and because of our belief in our team and what we feel we can do and what he does for us as a football team, you try to make a move like this, and it broke our way.”

The San Francisco 49ers today announced they have acquired two-time Associated Press All-Pro RB Christian McCaffrey from the Carolina Panthers in exchange for the team’s second, third and fourth round picks in 2023 and fifth-round pick in 2024.

McCaffrey (5-11, 205) was originally drafted by the Panthers eighth overall in the 2017 NFL Draft. Throughout his six NFL seasons with Carolina (2017-22), he has appeared in 64 games (58 starts) and registered 866 carries for 3,980 yards (4.6 average) and 32 touchdowns on the ground to go along with 390 receptions for 3,292 yards (8.4 average) and 18 touchdowns through the air. He has also started one postseason contest where he finished with six carries for 16 yards and six receptions for 101 receiving yards.

In 2019, McCaffrey was named Associated Press First-Team All-Pro at two positions (running back and flex) and earned Pro Bowl honors after starting all 16 games and finishing with 287 carries for 1,387 yards and 116 receptions for 1,005 yards receiving. His 116 receptions on the year are the most in a single season by a running back in NFL history, as he topped his previous output of 107 receptions in 2018, a season where he earned AP Second-Team All-Pro honors.

This season with Carolina, McCaffrey has started six games and registered 85 carries for 393 yards and two touchdowns to go along with 33 receptions for 277 yards and one touchdown. His 670 yards from scrimmage in 2022 are the fourth-most in the NFL.

A 26-year-old native of Highlands Ranch, CO, McCaffrey attended Stanford University where he appeared in 38 games (25 starts) where he totaled 6,987 all-purpose yards and 33 total touchdowns. He rushed for 3,922 yards and 21 touchdowns on 632 carries (6.2 average) and registered 99 receptions for 1,206 yards and 10 touchdowns. As a sophomore in 2015, he was a Heisman Finalist and earned AP Player of the Year honors after setting the NCAA record with 3,864 all-purpose yards.