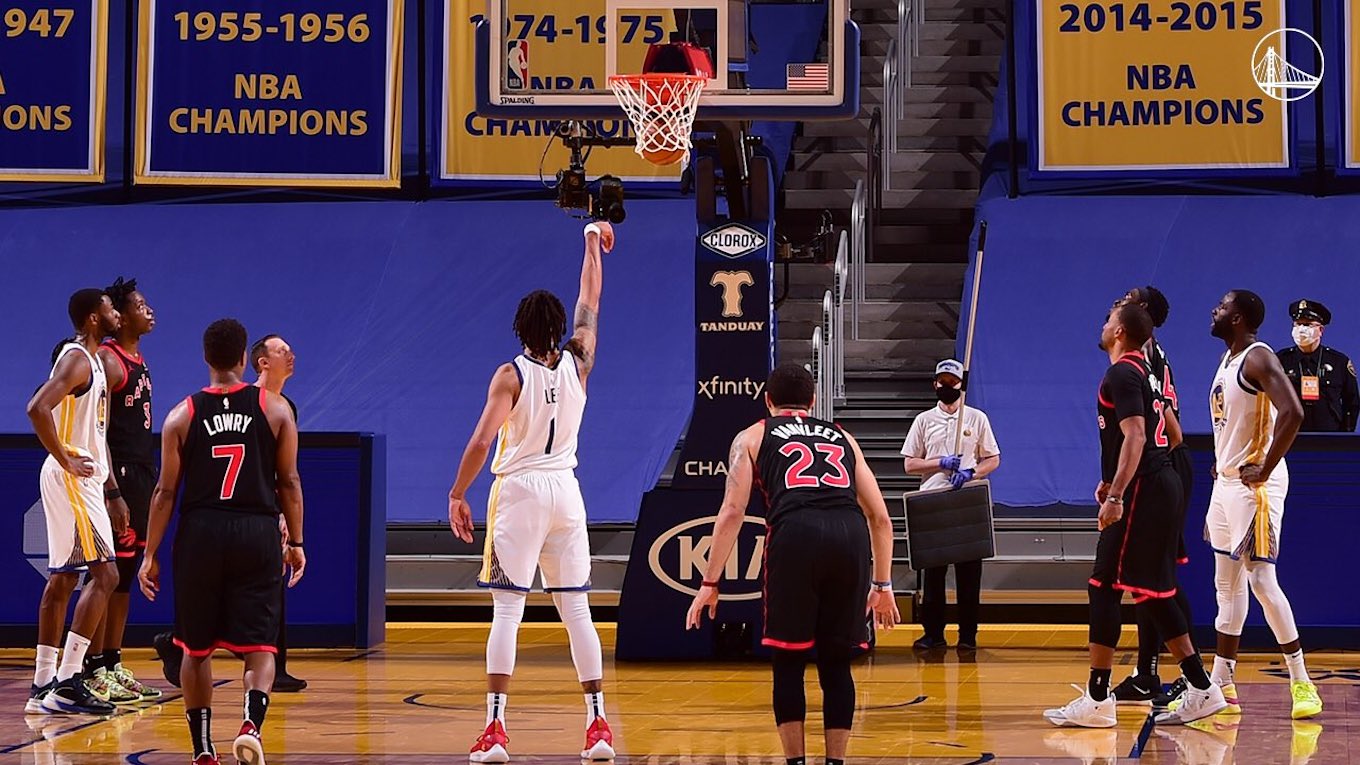 San Francisco –  It came down to the final seconds.  A late rally by the Toronto Raptors was not enough to stop the Warriors 106-105 victory over the Raptors.  After being down by as many as 15 points, Kyle Lowry dominated the fourth quarter to get his team back in the game and cut the lead to one point.

Golden State’s defense has improved over this homestand but tonight they made stops when it counted.  With 7 seconds left on the clock, the Warriors forced two missed shots. Back on the other end Stephen Curry was smothered on the inbound pass so, he passed the ball to Damion Lee who went up for the jump shot and got fouled. Two free throws made it a 106-105 game with 3 seconds left on the clock.

“We’ve become a good defensive team,” said Steve Kerr.  “Toronto is one of the toughest teams in the league to guard, they scored 144 two nights ago against Sacramento and we held them to 105 points.  They really took it to us in the fourth, we didn’t handle their pressure very well, we didn’t execute very well and those are all things that we have on tape to see where we can make some improvements and yet we were able to come away with the win.”

In the final seconds Pascal Siakam missed a jumper at the buzzer.  Curry finished with 11 points and 9 rebounds, he also recorded his worst shooting performance this season and in his career.  His brother-in-law, Lee on the other hand added 13 points in fifteen minutes and went 3-for-6 from the three-point line.

“Well, I never thought I’d go 2-for-16,” Curry said.  “My offense, I expect it to be there every night.  With how teams are defending night to night, being able to figure that out, in terms of having confidence across the board no matter who’s on the floor, I like where we’re at right now.  Forget my shooting we don’t win a game like this without our defense taking strides in the right direction.”

Golden State had seven guys in double figures.  Draymond Green had 10 points and 10 rebounds, his best night of the season.  Andrew Wiggins matched his career high with 17 points and four blocked shots.  The Warriors were aggressive on defense early and attacked the basket.

The Raptors started off with terrible shooting but stayed in the game.  By the second quarter Golden State increased their lead, despite an impressive fourth quarter from Lowry and Chris Boucher was the defensive threat for Toronto.  Boucher finished with 15 points, 6 blocks and 6 rebounds but fouled out with under three minutes left in the game.

“The play had many different options, same thing like the Chicago game,” Lee said on the final seconds.  “I told those guys if the play breaks down, I’ll be there to try to find an opening, find some space whether its to screen for someone, slip out or try to get the space to shoot.  They doubled Steph right off the inbound and I just stepped in whether I got fouled or not it was try to get a shot up.”

The Warriors final game of the homestand will be Tuesday night. They will host the Indiana Pacers before heading on the road to face the Denver Nuggets, Phoenix Suns and NBA Champs the Los Angeles Lakers.