Warriors even the series, dismantle the Celtics 107-88 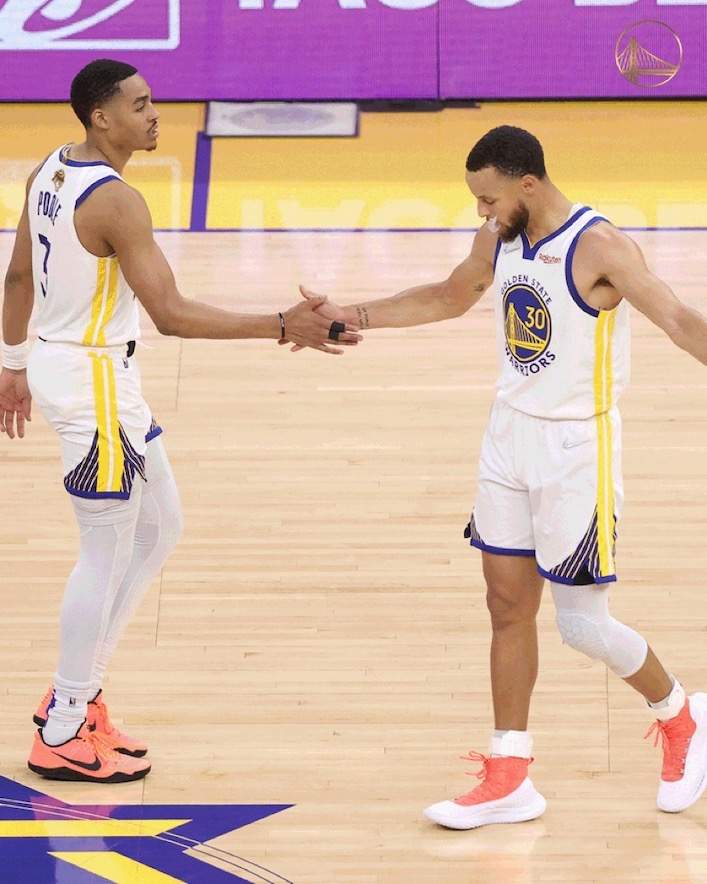 SAN FRANCISCO – Stephen Curry scored a game-high 29 points and Jordan Poole drilled a deep three-pointer from inside mid-court to lead the Golden State Warriors to a 107-88 victory over the Boston Celtics in Game 2 to even the series. The 88 points scored by the Celtics was their lowest output this postseason.

Poole shook off a slow start, and finished with 17 points off the bench for Golden State, who outscored Boston 35-14 in the third quarter. The Warriors held a two-point lead at halftime before seeing their lead balloon to 23 points by the end of the period.

Golden State carried that momentum into the fourth quarter, scoring six straight points before the Celtics threw in the towel and emptied their bench.

“That was obviously a big shot to get the crowd into it,” said Curry who finished 9-for-21 from the field. “Put kind of a dagger on that great third quarter that we had.”

Overall, the Warriors went on a 43-14 run late in the first half until early in the fourth quarter, that put the game away for Golden State.

“Yeah, I thought everybody was more engaged,” Warriors head coach Steve Kerr said. “It was pretty obvious, just our level of force and physicality was ramped up quite a bit, and it had to be.”

“We came out in that third quarter and we know how important it is to deliver that first punch and try to be aggressive, physical, and decisive,” said Poole, who shot 6-for-14 from the floor. “That’s pretty much what it is. I think we know how important those first couple of minutes are, and we try to execute as best as we can.”

Kevon Looney finished with 12 points on 6-for-6 shooting, while Klay Thompson and Andrew Wiggins scored 11 points each. Thompson struggled to find his shot, starting the game 1-for-10 from the field before finishing 4-for-19 and 1-for-8 from downtown. Draymond Green finished with nine points, seven assists and five rebounds.

Looney lamented how much Green’s intensity, leadership and playmaking ability drove the Warriors and DubNation.

As a team, the Warriors committed 12 turnovers that Boston turned into 15 points.

“We had 11 turnovers for 18 points in the first half. They had nine steals,” said Celtics head coach Ime Udoka. “But we weren’t strong with the ball overall…For us, that was a little disappointing, to give up 33 points off 19 turnovers. That’s kind of been a constant theme in the playoffs. When it happens, we’re in trouble.”

Jayson Tatum led Boston with 28 points (scored 21 points in the first half). Tatum, who shot 3-for-17 from the floor in Game 1 on Thursday night, finished 8-for-19 from the field including 6-of-9 from three-point territory. Jaylen Brown pitched in 17 points but finished 5-for-17 from the floor, and Derrick White added 12 points after scoring 21 in Game 1.

“We got to take better care of the ball,” Tatum said. “They got a lot of points off our turnovers. “That’s something we’ve got to do better for next game because we know throughout the playoffs, the games that we have high turnovers, kind of result to a loss. That’s definitely a point of emphasis, taking care of the ball for next game.”

Al Horford, who led the Celtics with 26 points in Game 1, scored just two points. He did have a team-high eight rebounds for Boston, who outrebounded the Warriors 44-43 tonight.

Golden State took advantage of the Celtics inside the paint and outscored Boston 40-24. The Warriors made life difficult for the Celtics, they held Boston to 30-for-80 shooting (37-percent) from the floor in Game 2.

“I don’t think we got as much penetration to the paint,” said Udoka. “They switched a few more things. Then turned the ball over and didn’t give ourselves a chance with a lot of those turnovers.”

The best-of-seven series shifts to Boston with Game 3 on Wednesday. Golden State’s defense tonight will go a long way in the Warriors’ quest for their fourth championship in eight years. Green is the linchpin to Golden State’s defense. The defense begins with him and trickles down to the rest of the squad.

“I think everybody played with more force,” Green said. “It wasn’t just me on Jaylen Brown. It was across the board. If I pick up my force and no one else does, it doesn’t work. It’s a total team effort. It doesn’t just work because of one guy.”

The Warriors have won five straight Game 2s in the NBA Finals dating back to 2015. Golden State improves to 5-0 after a loss this postseason with all five victories coming at Chase Center, with an average margin of victory of 15.4 points per the Elias Sports Bureau.

The Warriors improve to 10-1 at home during the postseason. 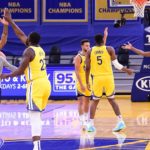