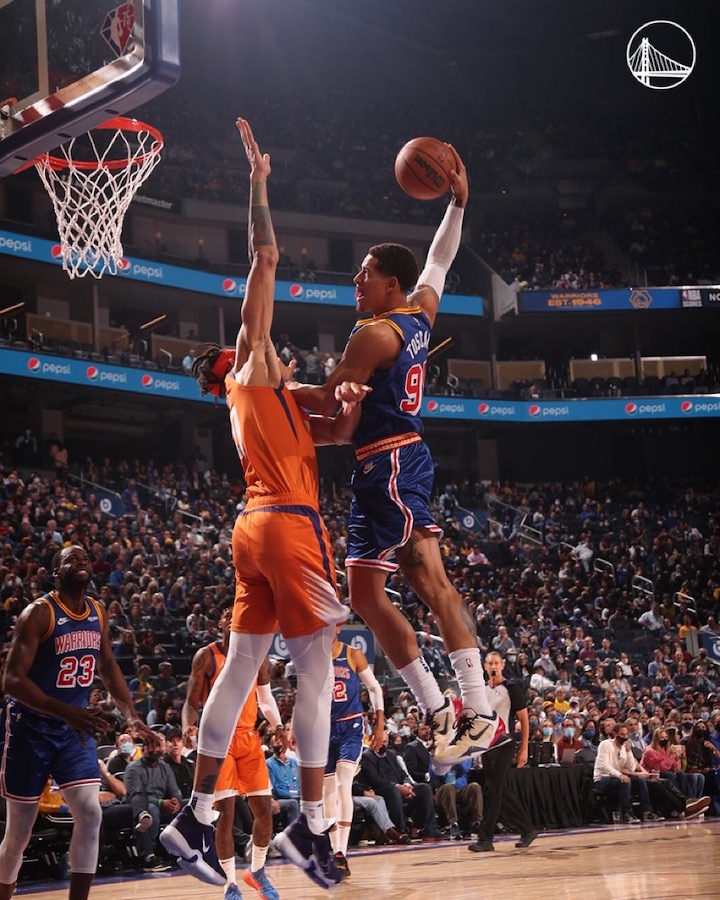 San Francisco – There’s a reason ESPN switched coverage from the Lakers vs Clippers game to the Golden State Warriors vs Phoenix Suns game. When the two best teams in the Western Conference face-off, it’s primetime television. The Suns 18-game winning streak came to an end after the Warriors 1defeated them 118-96 tonight.

“That really got the crowd going and a fun play for ur team,” said Warriors head coach Steve Kerr.

Toscano-Anderson took flight over McGee who stands 7 feet with a one-handed dunk that made the crowd go crazy. Golden State’s entire bench jumped out of their seats! Toscano-Anderson was greeted with hugs and handshakes as he made his way back to the bench, the Suns had called an immediate timeout.

The Warriors got off to a good start but the Phoenix stayed close behind. It was a close game before the half The Suns went on an 8-0 run to end the half 51-48 but never got that close again. Golden State went on an offensive burst in the third.

Deandre Ayton finished with a team-high 23 points while Chris Paul added 12 point and 8 assists. Phoenix looked tired and could not contain the outburst of 3s that came in the second half. Curry started the period with a 3, followed by Payton’s shot from the field and the Warriors dominated the rest of the way.

“We were, especially in the second half, much more patient,” said Kerr. “Once we settled down after that sort of disastrous final four minutes of the second quarter, we were really poised, competed and earned a really good win.”

Golden State bounced back tonight with good shot selections and defense. The Suns defense shut down the Warriors offense last game, and tonight they evened the series The next time these two teams meet will be on Christmas day in Phoenix.

The Suns were without Booker for their second game and suffered their first lost since October 27th when the Sacramento Kings beat them 110-107. Phoenix’s 18th win became a franchise record. Golden State’s sellout crowd relished in their loss and few players certainly didn’t want that streak to continue on their court.

When Curry was asked if he was glad the streak ended, he simply replied.

“Yes, because we lost to them already,” Curry explained. “You don’t want them to come into your building and keep that streak going. Obviously, it doesn’t mean much but just our 19th win, but it is nice to protect your home court.

Something’s got to give, and we’ve had a really good home record and nice streak going ourselves in this building, so we’d rather keep ours going then let theirs live.”