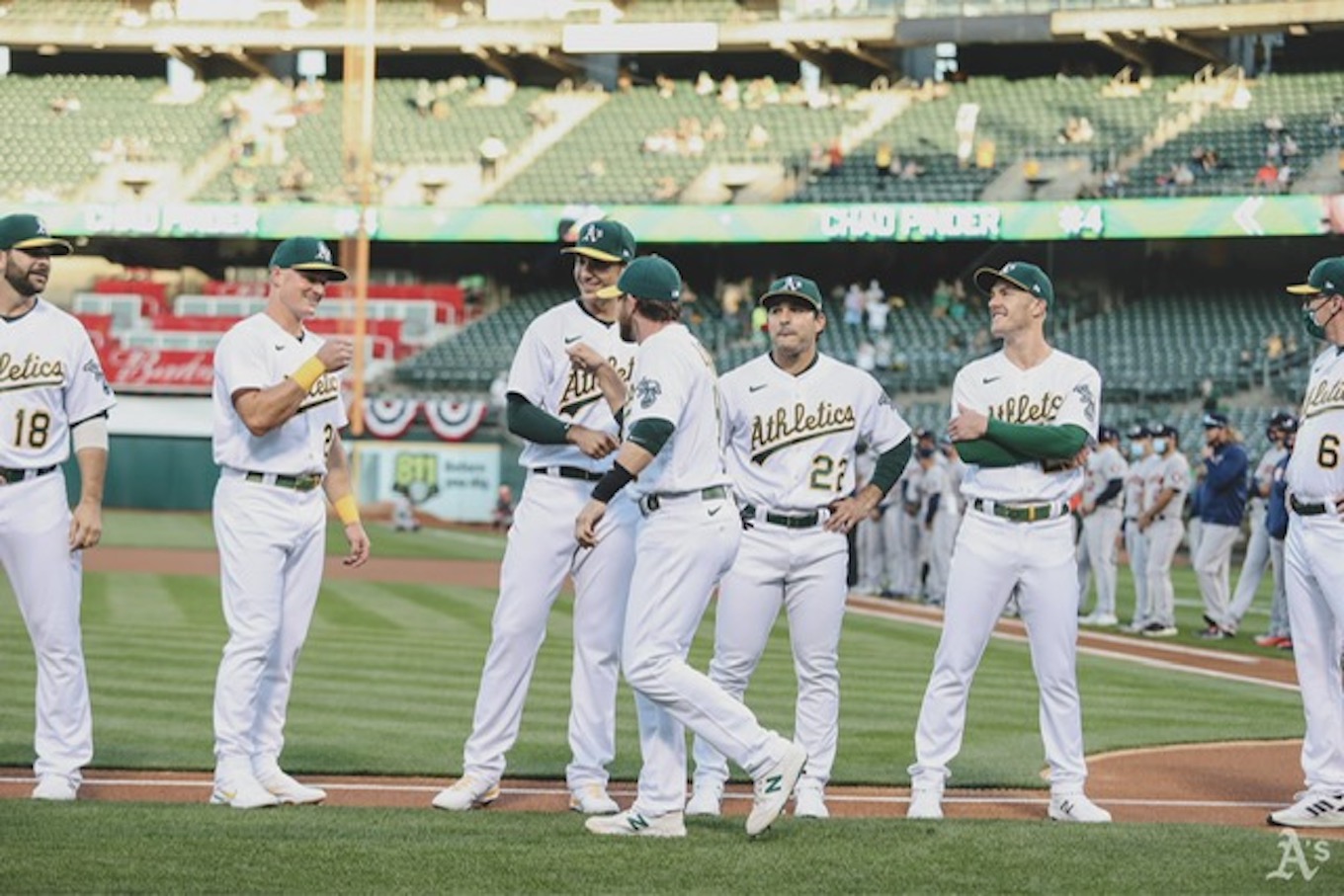 Oakland – There’s nothing like Opening Day and this year Major League Baseball has allowed fans to attend but only at twenty-five percent capacity since the world is still dealing with the coronavirus pandemic.  For the Oakland A’s, the fans the brightest part of tonight’s game. 10,436 people came out to watch a ball game just like old times.

Last season no fans were allowed during a short season.  Thus, it made fun to hear the crowd boo the Houston Astros all night.  But that didn’t last long, the Astros spoiled the A’s home opener by beating them 8-1.  Chris Bassitt did his best despite going 5.1 innings for his first loss in his first career Opening Day start.

“I thought he threw good,” Oakland’s manager Bob Melvin said.  “When the score is 1-0 coming out of the game, you’ve done your job.  Maybe tiring a little bit in the sixth, but to that point, he kept us in the game and gave us a chance.”

Bassitt Bassitt allowed a run in the fourth to snap his regular season streak at 16.2 innings and his Coliseum scoreless streak at 27.1 innings.  After going three scoreless frames Houston bats came alive in the fourth.  Jose Altuve leadoff the frame with a leadoff walk and Michael Brantley followed with a double to advance Altuve to second.

Alex Bregman hit an RBI groundout double and drove in Altuve to give the Astros a 1-0 lead.  Chad Pinder who made two spectacular defensive plays, made an incredible catch off the wall to steal a possible home run away from Kyle Tucker.  Bassitt forced Yordan Alvarez to fly out to end the inning stranding two.

“He’s a terrific player all the way around,” said Melvin on Pinder’s defense.  “For a guy that’s played the infield most of his career in the Minor Leagues and in the big leagues early on, he just has great instincts in the outfield.  It’s hard to play as many positions as he does and do it as well as he does.”

By the fifth, Pinder made another amazing play to keep the Astros from breaking this game wide open.  Yuli Gurriel leadoff the inning with a single.  Bassitt retired the next two batters before Altuve hit a line drive to right field.  Pinder made a diving catch to prevent Gurriel from scoring.

Houston took a 3-0 lead in the sixth.  Bregman doubled and Tucker got a free pass and Melvin went to his bullpen to end Bassitt’s night.  Yusmerio Petit replaced Bassitt and forced Carlos Correra to pop out.  But gave up a double to Alvarez who cleared the bases scoring in both Bregman and Tucker.

Meanwhile Zack Greinke pitched a strong game, he tossed six scoreless innings for his first career Opening Day win.  Greinke allowed three hits and struck out four.  Elvis Andrus gave the A’s an opportunity when he hit a ground double in the third but was left stranded to end the frame.  Matt Chapman hit a sacrifice fly bottom of the seventh and drove in Ramon Laureano who leadoff the inning with a double.

“He kept us off-balance with the slider and mixed in that curveball, being able to put his heater on both sides of the plate,” Pinder said.  He’s Zack Greinke for a reason, and he pitched a great game.”

By the eighth the Astros dominated with back-to-back home runs to both Brantley and Bregman to increase their lead 5-1.  Adam Kolarek issued a free pass to Correra and hit Alvarez with a pitch.  That sent Melvin back to his bullpen which was almost depleted.  J.B Wendleken replaced Kolarek and struck out the last two batters.

Oakland could not stop the bleeding by the ninth, the Astros scored two more runs.  Reymin Guduan gave up a leadoff single to Altuve and walked both Brantley and Bregman to load the bases.  Tucker hit a sacrifice fly and scored in Altuve.  A wild pitch drove in Brantley and Alvarez sacrifice fly drove in pinch-runner Robel Garcia.

Brantley had a career night, he went 3-for-4 with a double, home run and a walk.  Brantley is 7-for-11 (.636) with three multiple hit games in three openers with the Astros.  Pinder continues to be amazing all over the field.  He made his third straight Opening Day start at his third position (tonight in right field, last year at second base, 2019 in left field).

Despite the loss Oakland still has three more games left in this series.  Friday night’s game will feature Jesus Luzardo vs Cristian Javier on the mound at the Coliseum at 6:40pm.