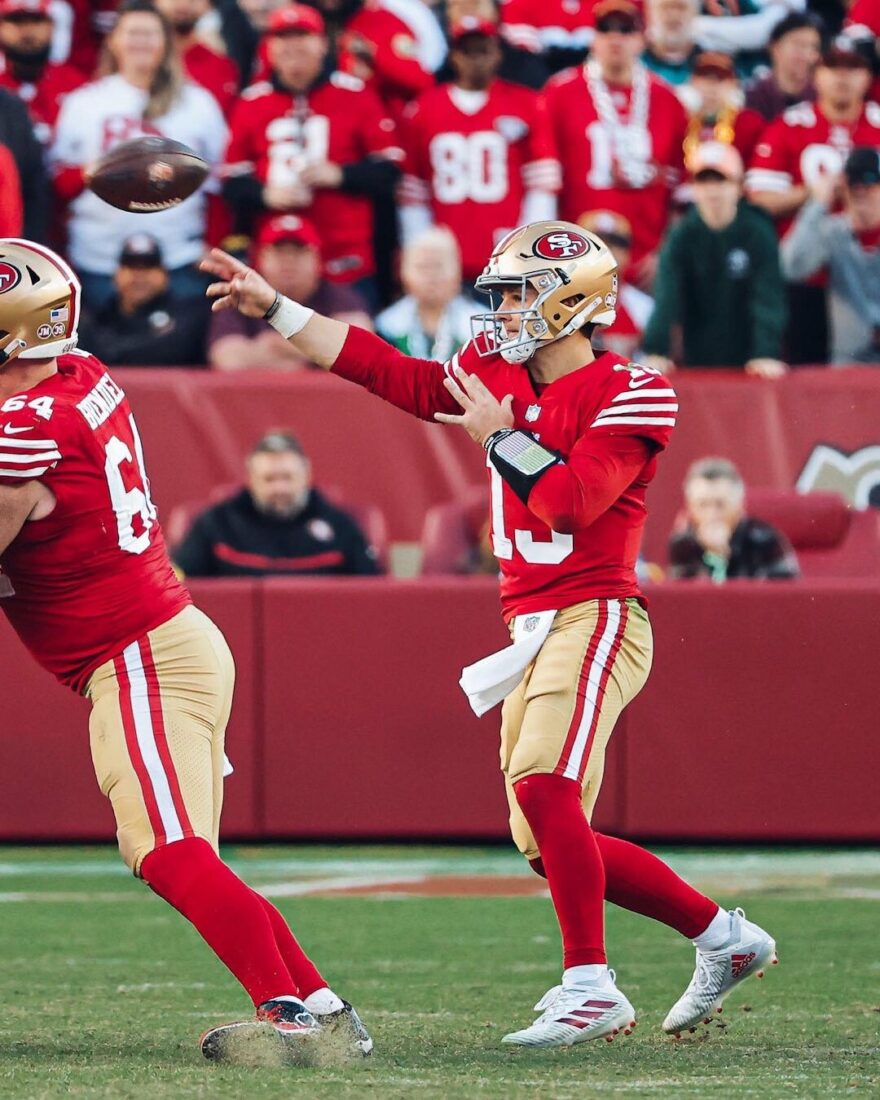 SANTA CLARA  – Rookie quarterback Brock Purdy replaced injured Jimmy Garoppolo and recorded his first two touchdowns of his career. Despite losing Garoppolo for the remainder of the game, the San Francisco 49ers rode another strong performance behind their defense to defeat the Miami Dolphins 33-17 for their fifth straight win.

“He’s got some balls out there,” said 49ers head coach Kyle Shanahan said of Purdy. “Forgive me for saying that.”

The 49ers (8-4) allowed a 75-yard touchdown to Trent Sherfield on the first play of the game before settling down and holding off the Dolphins until the fourth quarter. The defense really shined against a red-hot Miami team that scored at least 30-plus points in four straight games. Unfortunately, the Dolphins (8-4) saw their five-game winning streak snapped.

Purdy finished 25-for-37 for 210 yards, with two touchdowns and one interception. He also was sacked three times.

Purdy, who was nicknamed “Mr. Irrelevant” after being selected with the final pick in this year’s draft, was named the team’s starting quarterback for the remainder of the season after Shanahan confirmed Garoppolo broke his foot after being sacked by Dolphins linebackers Jaelan Phillips and Jerome Baker on the final play of San Francisco’s first possession of the game.

“It’s pretty crushing. We know what Jimmy’s been through, how hard he’s worked at this,” Shanahan said. “That was a really cool game, just as a team and all the stuff that went on throughout the game and just be able to overcome some things. So it’s such a special win. But definitely mixed emotions hearing about Jimmy.”

Garoppolo was taken to the locker room on a cart and did not return, leaving Purdy to finish the game. On his first drive of the game, Purdy capped a 9-play, 54-yard drive with a 3-yard touchdown pass to fullback Kyle Juszczyk giving the 49ers a 10-7 lead in the first quarter.

“He has a savviness to him,” said Juszczyk about Purdy. “He has an understanding; he has a confidence in him. I thought he did a really good job today in the huddle. Just commanding everyone’s respect and getting the plays in and out, delivering some confident passes out there. So I think we can definitely still do some things with Brock.”

With the game tied at 10-10 following a 43-yard field goal by Miami’s kicker Jason Sanders, Purdy threw his second touchdown of the day, a 3-yard score to Christian McCaffery with 4 seconds left in the first half for a 17-10 lead at halftime.

McCaffrey was the straw that stirred the drink offensively for San Francisco, finishing with 146 all-purpose yards from scrimmage. He led the 49ers in both rushing (17 carries for 66 yards) and receiving (8 catches for 80 yards and a touchdown.)

McCaffrey believes that Purdy can lead the team down the stretch in the wake of Garoppolo’s season-ending injury.

“Man, he plays with a lot of confidence. Didn’t miss a beat,” said McCaffrey. “He came in and was great in the huddle. Obviously made some plays. I got to make a couple more plays for him. When something like that [Garoppolo’s injury], it’s on us [the offense] to step up. But he did a great job all the way until the end, staying poised.”

Linebacker Fred Warner, who recorded an interception in the fourth quarter, praised Purdy’s competitiveness after the game.

“He’s played against the best defense in the league the past 13 weeks,” said Warner. “He’ll be fine. He has the ‘it’ factor.”

San Francisco had their four-game, second-half scoreless streak end after Tagovailoa connected with wide receiver Tyreek Hill on a 45-yard touchdown pass, down the middle of the field in the fourth quarter but held the Dolphins in check for the remainder of the game. Nick Bosa’s strip-sack on Tagovailoa was recovered by linebacker Dre Greenlaw for a 23-yard scoop-and-score icing the game for San Francisco.

Over their last five games, the 49ers defense has held opponents to 17 or fewer points their longest streak since 1997. San Francisco outscored opponents 70-7 in the second half in five straight games.

“He looked like he had some dog in him,” Bosa said of Purdy. “I love his mindset. He’s super tough. He’s not afraid to make mistakes. He gets playmakers the ball. He’s our guy now.”

Bosa, who registered three sacks on the day giving him an NFL-best 14.5 this season, led a 49ers defense that held Tagovailoa and the high-octane Miami offense to 308 total yards and 0-for-7 on third downs. San Francisco took advantage of a Dolphins offensive line that were without starting tackles Teron Armstead and Austin Jackson.

“It sucks that we didn’t come out and say what we wanted to do collectively as a team,” said Tagovailoa. “Obviously, it starts with me offensively. Turnovers, with third-down communication errors, in that retrospect it’s hard to win a game when you’re not on your Ps and Qs and you’re not dialed in.”

Tagovailoa finished 18-for-33 for 295 yards, two touchdowns and two interceptions. Like Purdy, he was sacked three times.

“I think that was an outstanding job by the [San Francisco] 49ers defense, just the team collectively,” said Dolphins head coach Mike McDaniel. “They brought it. If you don’t completely execute it’s going to be tough for your whole team to come out on top.”

Miami’s first quarter touchdown ended a shutout streak of more than 94 minutes by the 49ers, who hadn’t allowed a point since the second quarter against the Arizona Cardinals two weeks ago in Mexico City.

“We didn’t flinch,” Warner said after the Dolphins opening play. “We came back to the sideline and you can’t look at things like that emotionally. You’ve got to just look at it for what it is and and see how you can adjust. I guess that kind of allowed us to really settle into the game quicker, obviously when you when you have a play like that.”

San Francisco concludes their three-game homestand next week against Tom Brady and the Tampa Bay Buccaneers, which will be Purdy’s first career start.

“Dude’s been playing football longer than I’ve been alive so it’s pretty cool,” Purdy said of Brady, who was drafted in 2000, Purdy was born in 1999. 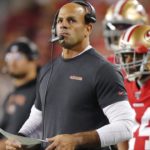