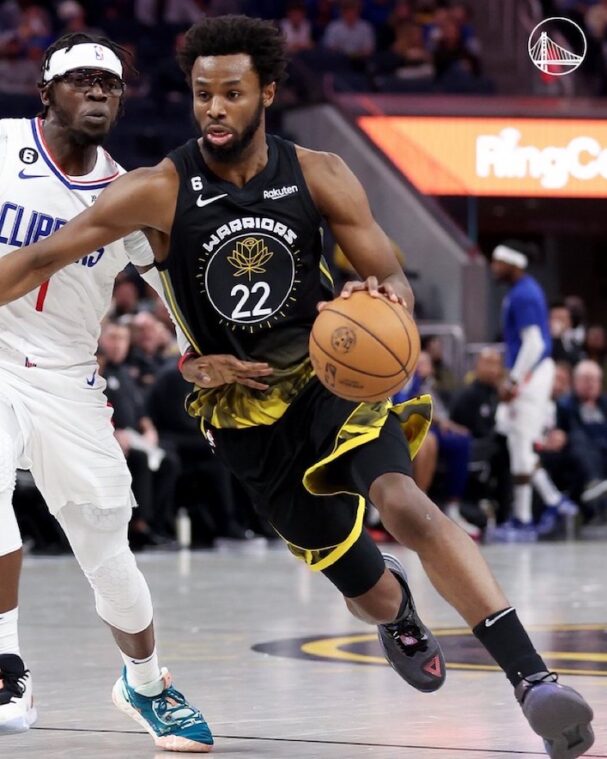 San Francisco – Andrew Wiggins scored a game-high and season-high 31 points, his first 30-point game of the season and 45th of his career. Wiggins took over the usual duties of Stephen Curry to help the Warriors beat the Los Angeles Clippers 124-107.

Wiggins six 3-pointers matched a season high (the previous game he played 11/20 at HOU). He’s made 12 3-pointers in the last two games he’s played in, the most he’s ever made in his career in that span according to Basketball Reference.

“I mean, he’s shooting the lights out,” head coach Steve Kerr said. “He’s so consistent from the field and the 3-point line, and you see how comfortable he is in our offense, constantly slipping to the rim. He got a couple of layups, at least two maybe three tonight when Draymond’s (Green) got the ball at the top and Wiggs sets that pin and slips right to the rim knowing that defenses are afraid of Steph (Stephen Curry) and Klay (Thompson) on those end outs.

So, he’s gotten to a point where he’s really, really comfortable with his teammates and the way we play, and at the other end he’s constantly taking the best, generally back court player or wing player. Wiggs has been fantastic.”

Golden State won their seventh straight home game to improve to 8-1 at home and 9-10 overall. It marks the longest home-winning streak since an 11-game streak last season (1/21-2/3/22). The Warriors eight home-wins are tied for the second most in the NBA.

“It’s there,” said Wiggins on his shot selection. “My guys and the team, they do a lot of good things, and the ball moves and you know, it finds people and the last couple of games they found me in the right spot and I’ve been knocking it down. We’ve been sharing the ball, everyone’s been in a good rhythm playing together, so that’s what’s making it all connect.”

In the second quarter, the Warriors held the Clippers to 18 points, matching the fewest points allowed by Golden State in any quarter this season (18, third quarter on 10/29 at CHA).

Stephen Curry tallied 22 points and made four 3-pointers, extending his NBA-record 3-point streak to 206 consecutive regular season games. Draymond Green dished out 12 assists, his third game this season with 10-or-more assists. Klay Thompson scored 15 points in the first quarter, finishing with 18 points. In the last two games he’s played in, he has totaled 35 points (11-14 FG, 6-8 3P, 7-8 FT) in the first quarter (20 first-quarter points on 11/20 at HOU).

“We weren’t fouling so we were able to have a good flow to the game,” Green said on tonight’s performance. “The ball was moving. That is our style of basketball when we are able to get guys out in transition, get stops, and play our free-flowing offense. We are pretty tough to stop, and we did a good job of that. Everyone was getting open looks, cutting and had good energy with the ball.”

ON TRYING TO PAIR DRAYMOND GREEN WITH THE SECOND UNIT MORE:

“Yeah, we’ll try that again tonight. Just try to give that unit another ball handler and a little more organization. We’ll see. They held together pretty well in the second half of that Houston game. We’ll shift to that rotation tonight.”

ON MANAGING THE MINUTES OF THE STARTERS DURING A SLOW START ON THE ROAD:

“Well, we have an entire performance staff that assesses our players on a daily basis. The schedule sometimes catches up to some of our guys. Obviously, we have Klay (Thompson), based on the injury history, Draymond last year, we are especially vigilant with those guys when it comes to, if they are banged up, they are going to get a night off. The same thing applies to everybody really. This is the way you have to get through the NBA season. It’s not always ideal, but if a guy’s banged up and needs a rest, you just got to give him a night off. That will kind of pay off down the line.”

“I don’t even remember how he hurt it, but it has bothered him from time to time. I do see him with a heat pack on during the game and gets treatment on it after the games. It is a factor, so all part of it.”

ON IF SOME PLAYERS WANT TO PLAY THROUGH FATIGUE AND NAGGING INJURIES:

“They don’t really have much of a choice. When I got here eight years ago, we had two strength coaches a trainer, and an assistant trainer. That was our entire team. So four people were basically on the performance side. I want to say we have like 12 now, including two people who monitor every movement the players make in every practice and every game. And so we have so much more information now and that allows the performance team to determine a player’s vulnerability to injury, what the player needs to be at his best going forward. At this point, it’s actually pretty simple. It doesn’t mean they won’t try to fight me on it, but they don’t have much choice.”