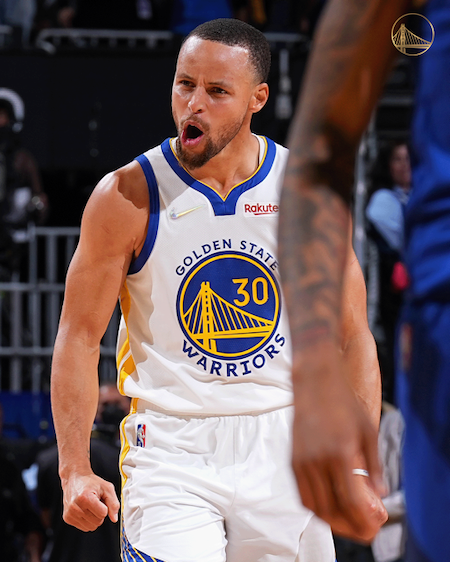 SAN FRANCISCO – Stephen Curry came off the bench for the second straight game and scored 34 points in 23 minutes. Warriors head coach Steve Kerr stayed with the same starting five from Game 1. Curry still on restricted minutes has proven he is back! Curry went 12-for-17 and 5-for-10 from the three-point line to help defeat the Denver Nuggets 126-106.

“Just starting to find a rhythm, coming off the bench trying to get used to the speed of the game,” Curry said. “The first game didn’t really feel like normal but in the first half I got a little pep in my step, body felt good. I was able to get to some spots and make certain shots.”

Golden State protected their home court and up 2-0 in the series. Despite a hot start, Nikola Jokic lead all scores for the Nuggets with 26 points and 11 rebounds. Jokic had five fouls and two Technical Fouls, he was ejected with 7 minutes left in the fourth quarter. The Warriors defense did a good job frustrating the “Joker” to make him lose his cool.

Golden State combined for 17 three-pointers tonight. Jordan Poole had another spectacular game starting in place of Curry. He scored 29 points and had 8 assists. Klay Thompson finished with 21 points. Curry’s 16 points in the first half, set a new record of 3,000 career postseason points, becoming the 27th player in NBA history to reach the milestone.

After a slow start in the first period, Denver took advantage by heading to the free throw line 11 times in the first half. The Warriors were down by as much as 12 points in the first half but things quickly changed when both Curry and Poole got hot and scored 16 and 14 points each. Golden State went on a 16-0 run to take the lead 57-51 to end the half.

The Warriors also had 10 steals that resulted in 25 points and went on a 23-11 run late in the fourth. Draymond Green’s defensive game was probably the best this season. He single-handedly disrupted the Nuggets flow on offense. Golden State combined for a total of 8 blocks. Green’s energy and leadership on the floor is just incredible for this team.

“Don’t look at the stat sheet because it doesn’t mean anything, he dominated that game,” said Kerr on Green. “This guy is just one of the most unique, powerful and impactful players I’ve ever seen.”

The combination of three guards on the floor definitely gives the meaning to an additional Splash Brother. Poole has been very effective starting than coming off the bench. Despite not being a finalist for “Most Improved Player”, Poole has proved his game reached a higher level this season. He’s an additional threat on the floor that no one saw coming.

“Ultimately, we got to have Steph Curry in the lineup,” Green said. “We’re not trying to keep Steph in the 6th man role. But ultimately Jordan has to start too. It’s a great problem to have but it’s gonna have to get figured out at some point… Steve can figure that one out.”

“The maturation of his game over these three years has been unbelievable,” said Curry on Poole. 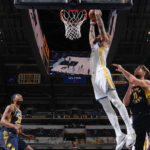 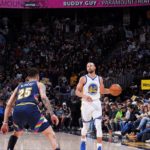