49ers head into Bye Week after loss to Saints 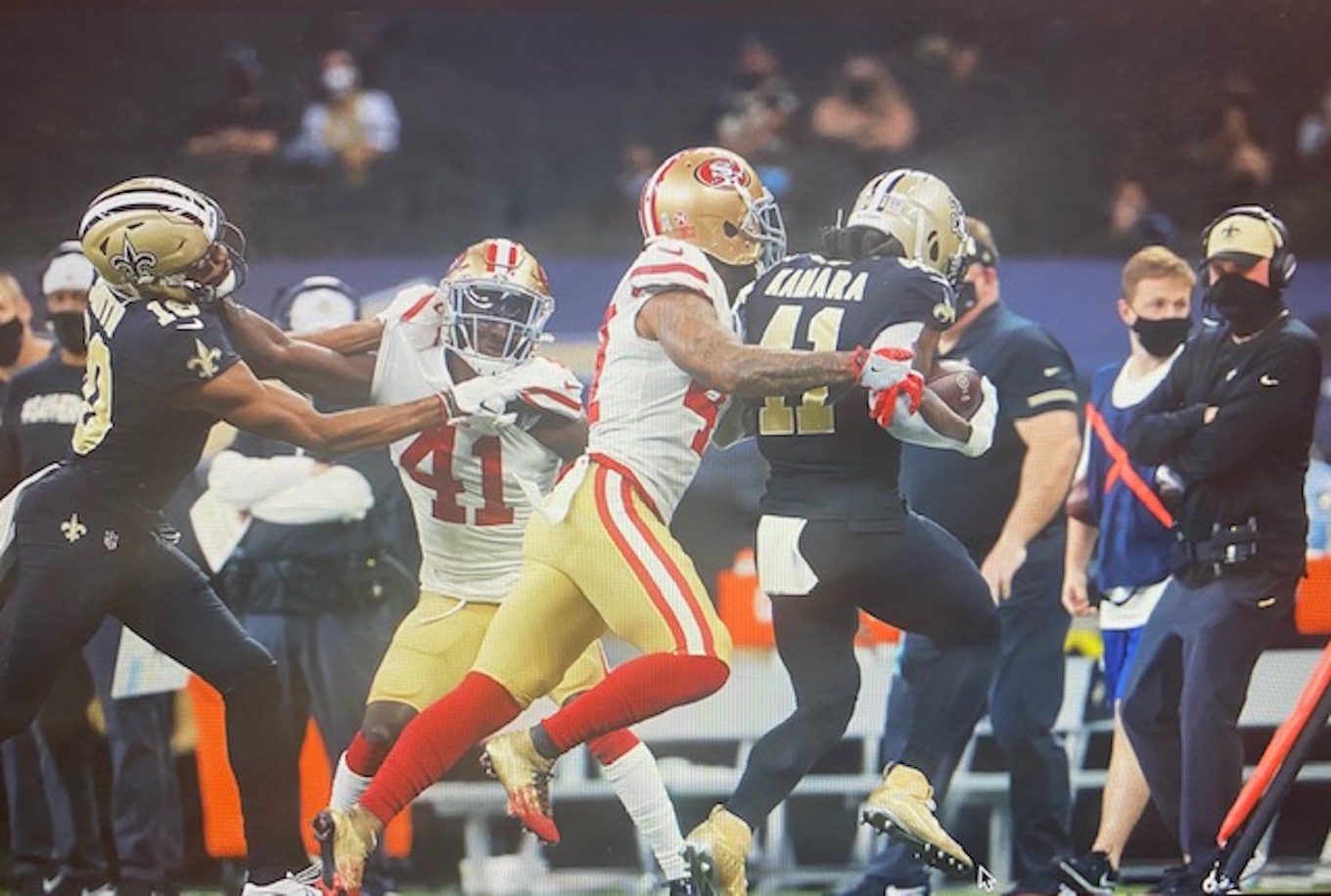 The 49ers head into the bye week and the time off couldn’t have come any sooner.  The countless injuries and frustration of losing has taken a toll on the team.  San Francisco suffered their third straight loss today to the New Orleans Saint 27-13.

“I think it really came down too turnovers and that was most disheartening,” said 49ers head coach Kyle Shanahan.  “If we took care of the ball with the effort that all the guys gave, I think it could’ve been a much different result.”

Despite a shaky start, the Saints dominated majority of the game.  Drew Brees went 8-for-13 for 76 yards and one touchdown before sitting out the second half due to a rib injury.  Alvin Kamara recorded three touchdowns, two on the ground and one from Brees.

The 49ers took advantage of New Orleans early struggles.  The Saints were charged with a 15 yard holding penalty on opening drive, that led to Nick Mullens 4-yard touchdown pass to Brandon Aiyuk.  On the next play, Deonte Harris muffed a punt and Marcell Harris recovered for the 49ers.

Mullens found Ross Dwelley for a 17-yard pass but on the play, New Orleans was charged for roughing the passer and that pushed San Francisco to the goal line.  But a stout Saints defense forced Robbie Gould to kick a 32-yard field goal for a 10-0 lead.  After that it became sloppy play for San Francisco.

Bye the second quarter, Brees and his offense got their second wind.  Will Lutz kicked a 49-yard field goal.  A muffed punt by the 49ers, put the Saints back in control.  Kamara’s 2-yard touchdown tied the game 10-10.  With 1:23 left on the clock before the half, Brees 3-yard touchdown pass to Kamara put the Saints up 17-10.

Fred Warner gives his thoughts on how the loss.

After the half, the 49ers had nothing left in the tank.  Mullens threw two interceptions in both the third and fourth quarter.  A scoreless third led to New Orleans to kick a field goal and scoring another touchdown in the fourth, while San Francisco struggled on both sides of the ball.

Richie James muffed punt, that led to Kamara’s third and final touchdown of the day. Special Teams two muffed punts proved costly, giving the Saints 14 easy points.  A week is much needed and off may produce some healthy guys but right now their chances of a return to the Super Bowl seem bleak.

“I just want to get more time for guys to come back,” Shanahan said.  “Hopefully with an extra week off, I’m hoping to get at least a couple guys back on offense and I know we’re gonna get hopefully one back on defense, maybe more.  And not just for them, giving them more time, but it’s a chain reaction.  We’ve had a lot of guys who have had to be out there a lot, some rotational players who have been carrying the load for way too long.

“They need some rest.  They need to get away.  We’ll have a couple days just to keep guys loose and moving around a little bit so we don’t get too far away from football.  This is as much of a needed rest as a team I’ve been on.”

49ers explode on offense for 1st home win in over a year November 15, 2021
Previous Post AfroTech goes virtual for 2020
Next Post 49ers add more to the injured and COVID-19 list