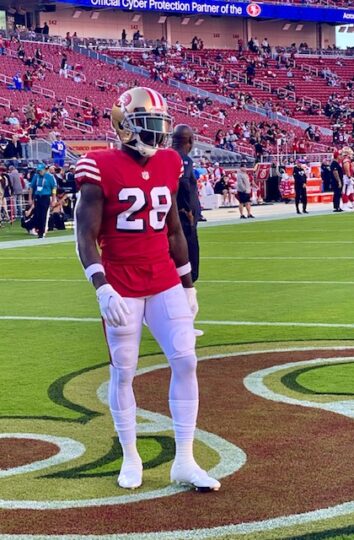 Santa Clara – Jimmy Garoppolo never disappoints against the Los Angeles Rams. He’s owns a 7-0 win streak during the regular season. Garoppolo’s completed 70.1 percent of his passes with eight touchdowns and a 98.6 passer rating vs LA outside the 2019 playoffs.

Tonight Garoppolo continued his regular-season streak with the 49ers 24-9 win over the Rams. He went 16-for-27 for 239 yards and one touchdown for the night. But the real “MVP” was the defense. San Francisco’s defense sacked Matthew Stafford a total of seven times and didn’t allow one touchdown. The Rams offense was unsuccessful tonight, Matt Gay scored all of LA’s 9 points by kicking a 39, 29 and 26 yard field goal.

“We’ve had some dog fights against these guys,” Garoppolo said. “That’s a good football team and you’ll give them credit. That D-line, that’s a hell of a D-line. And our guys stood up to them and I thought they played really well.”

The 49ers were unstoppable, in the first series Garoppolo went 5-for-6 for 59 yards before Jeff Wilson Jr. broke through tackles to rush for a 32-yard touchdown in the first quarter. By the second quarter, Garoppolo tossed a short pass to Deebo Samuel who dismantled the Rams defense for a 57-yard touchdown making it a 14-3 game.

After going scoreless in the third quarter, Garoppolo found George Kittle in the end zone for a touchdown to start the fourth. But after further review that play was ruled incomplete, Kittle didn’t have both feet in the end zone. Robbie Gould kicked a 25-yard field goal to extend San Francisco’s lead 17-6.

“I was real happy overall, obviously with our whole team,” said Kyle Shanahan. “It was a cool way to win. We knew it would be a battle, to keep them out of the end zone was great. I thought our special teams played well.

I thought we had a chance to run away with it, especially after [TE] George’s [Kittle] touchdown, and then for that to get returned, and then the next time down there thinking we were going to get that field goal and come up short on that. But then [S Talanoa Hufanga] Huf getting that pick six got us right back at it. So, it was cool to not play perfect, but to overcome a lot of things and have a good, big victory.”

Gould kicked another field goal for 25 yards before Stafford’s pass intended for Cooper Kupp was intercepted by Hufanga who rushed it back late in the fourth for a 52- yard touchdown. That sealed the 49ers victory and tied them with all four teams in the NFC West but for now, San Francisco hold’s first place after their win tonight.

“I think it’s to be best in the league,”Bosa said. “It’s kind of our mindset every year and this year we have the personnel to do it. Not that we haven’t in the past, but at all all three levels are elite players. I think the addition of [CB Chavarius Ward] and [S Talanoa Huffanga] starting to play at this level and then the depth on the defensive line. So it’s a group effort.”

Bosa registered 3 tackles and 2.0 sacks, giving him 6.0 on the season and 30.5 in his career, which ranks tied for the 10th most in franchise history. Bosa became the first member of the 49ers to register 1.0 or more sacks in each of the first 4 Weeks of the season. Hufanga notched 4 tackles and recorded his second interception and the first touchdown of his career.

“All of our games against the Rams are close,” said Arik Armstead. “Obviously Huf [Talanoa Hufanga] made the game-changing play that really put us over the top. I’m really proud of everyone. It was a must-win for us and we got the job done.”

“We were in man coverage, locked up with the tight end,” Hufanga said. “They had been running screens all night and I saw a different release than I’m used to. Instead of going and following my man I just turned my head and the ball kind of dropped in my face, I’m not going to lie. I thought [Los Angeles Rams QB Matthew] Stafford was going to catch me, I’m not going to lie. My 40-yard dash time doesn’t help when it comes to that, but definitely very grateful to go out there with my guys and have fun.”