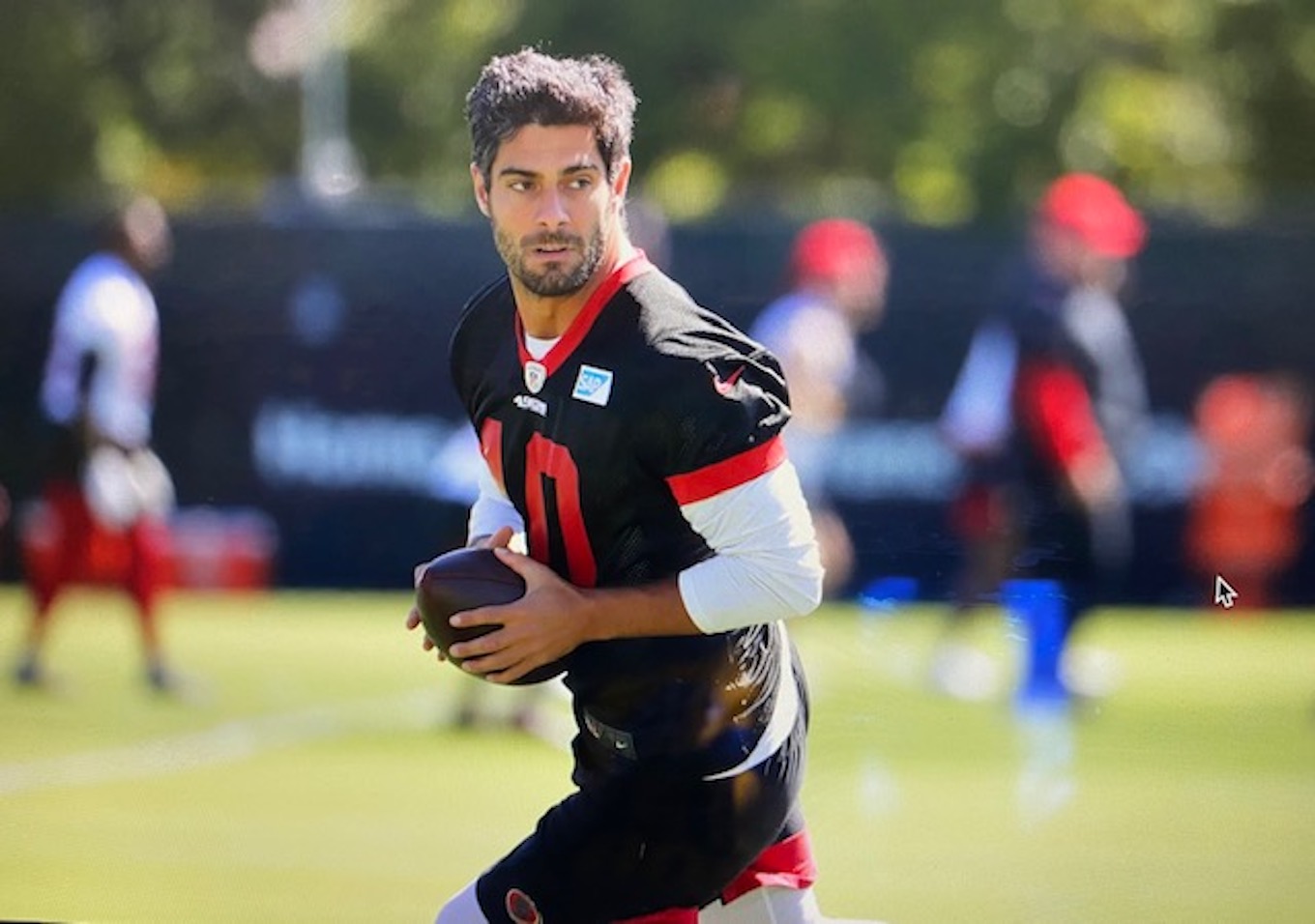 Santa Clara – The 49ers returned for the teams first Organized Team Activities (OTAs) and had a 89 of 90 players show up.  But all eyes were on Jimmy Garoppolo, after missing a substantial amount of time last season.  A healthy Garoppolo looked good without his usual knee brace on.

“I think getting the ankle right, doing mobility, things like that, trying to keep the muscles pliable and staying hydrated,” said Garoppolo.  “All that stuff applies.  I think really, it’s just getting the fundamentals down and playing within the offense.  When I play within the offense, things are good and things go well and I stay healthy.  So that’s a big part of the offseason.

Ankle feels great.  It really hasn’t been a bother since, I don’t know.  I can’t remember when.  The knee brace, though, that’s just kind of one of those things that will come and go.”

Garoppolo’s best year was his first season with the 49ers back in 2017.  After C.J. Beathard got injured, he made his first start for San Francisco December 3, 2017 against the Chicago Bears.  Garoppolo went 7-0 in his first seven starts (including 2 earlier in the year with the New England Patriots) since Ben Roethlisberger in 2004.

But during the 2018 Garoppolo tore his ACL in Week 3 ending his season.  In 2019 after returning from his injury, Garoppolo finished the season with 3,978 passing yards, 27 touchdowns and 13 interceptions before leading his team to Super Bowl LIV before losing to the Kansas City Chiefs.

The 2020 season, year of the pandemic Garoppolo injured his ankle in Week 2, missing two games before returning.  In Week 5 he was benched after competing 7-of-17 attempts and two interceptions.  By Week 8 he injured his ankle again and would be out for the remainder of the season.  This is why the 49ers drafted Trey Lance to be better prepared for any ongoing injuries to their starting quarterback.

“Jimmy looks like you guys have always known him,” head coach Kyle Shanahan said.  “He’s been great here these two weeks.  I haven’t seen him for these two weeks for a little bit also.  His ankle seems totally healed.  I haven’t even asked him about it because it looks so good.  So, I’d be surprised if there’s anything lingering from it.  He’s had a good two days of practice and hopefully we’ll give him a few more reps as we get going here and get everyone else in better shape.”

Garoppolo addressed the rumors that he was upset about the draft, after Shanahan explained (after the draft) he spoke with his quarterback who was understandably pissed.

“When it initially happened, there’s a million emotions that go on throughout your head and you think of all the possible scenarios and things like that,” said Garoppolo.  “But at the end of the day, I want to play football.  I want to go out there and win games.  That’s what I do.  It wasn’t anything too crazy.  It took a little while to process everything.  But once I did, it was just, go out there and ball.  You’ve just got to attack it.  NFL is a crazy business, things happen, but you’ve just got to attack it day-by-day and make the best of it.”

When asked how he and Lance get along, Garoppolo didn’t hesitate to say all is well with the QB group.

“Trey’s real cool.  We’ve had a great relationship so far,” he explained.  “All the QBs, we’ve got a big QB room right now.  It’s a good group of guys, fun to be around.  It’s kind of one of those things, I don’t want to do anything out of the ordinary, do something that’s not me.  So, I just try to treat it like I normally would with anyone else.  I just go about my business, just be myself and let the cards fall as they may, or chips fall as they may.”

Nick Bosa is set to return for Training Camp.  He’s been in Florida rehabbing and is expected to make a full recovery.  Bosa suffered a torn ACL in Week 2 against the New York Jets.  His injury was season-ending.

“Nick’s in Florida.  I’ve been talking to Nick since February on this,” said Shanahan.  “He came out in February for a while to get checked up on his knee and stuff.  With him coming off the ACL and everything, it’s going great.  He’s got a good setup out there with his brother and the guy who works with his knee.  They’re in contact with our guys all the time and just didn’t want to take him off his routine right now.  I totally agree with him out there.  He’s going to show up at some time during this, but he won’t be going out there doing anything coming off the ACL, but we fully expect him to be ready for training camp.”