49ers lose a thriller at home for season opener 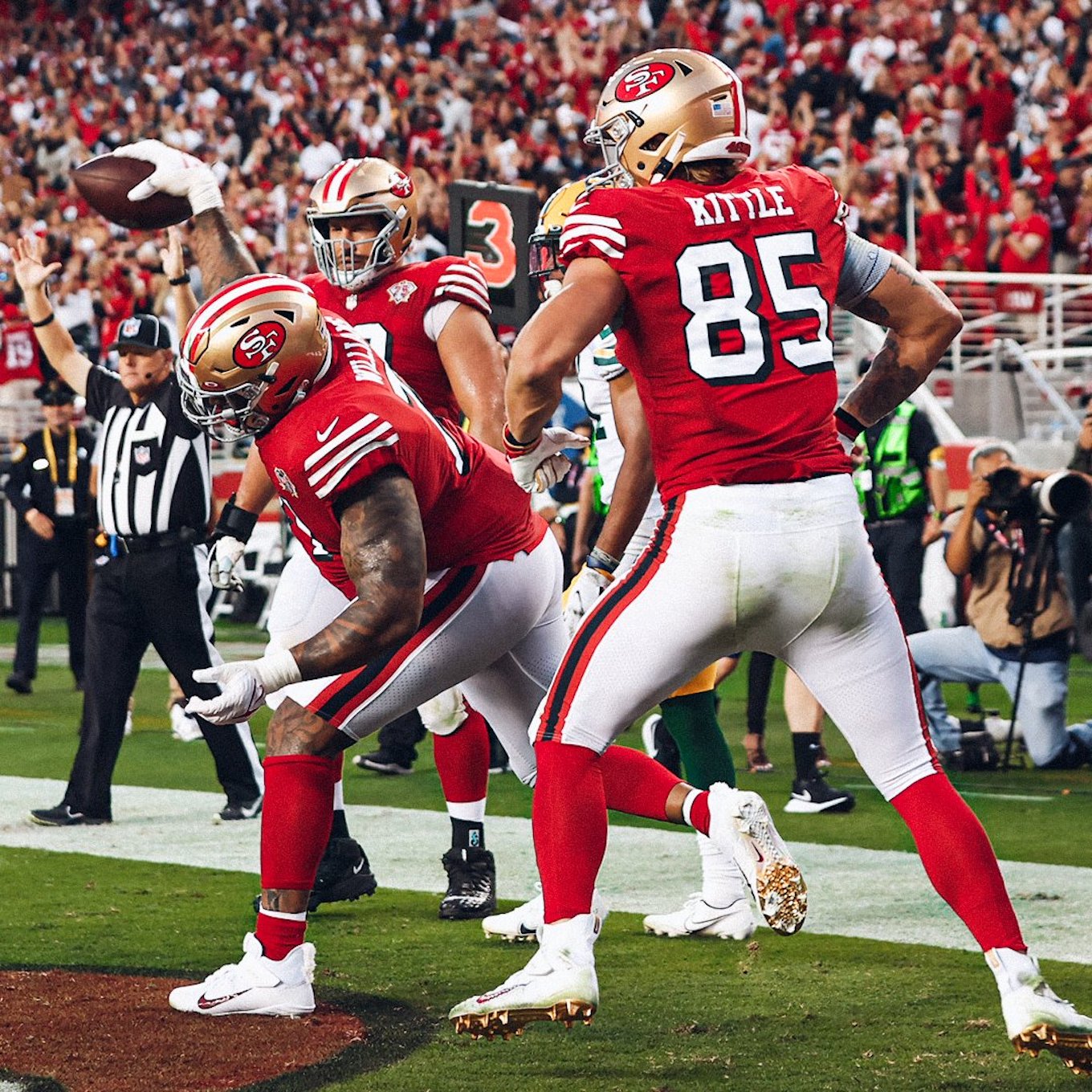 Santa Clara – The 49ers hosted the Green Bay Packers Sunday Night and it was a dramatic finish to say the least. Jimmy Garoppolo connected with Kyle Juszczyk for a 12-yard touchdown and gave San Francisco their first lead of the night.

“Yeah, you always worry with [Green Bay Packers QB] Aaron [Rodgers] on the other side,” said head coach Kyle Shanahan. “That’s why we didn’t use any timeouts. We we’re hoping to take it down, but it was hell of an effort by Juice to get in.”

With 37 seconds left Aaron Rodgers led his offense for the game-winning drive that stunned a sold to crowd at Levi’s Stadium. Rodgers found Devante Adams twice for a 25 and 17 yard pass that setup Mason Crosby’s 51-yard field goal that sealed their 30-28 victory over the 49ers.

It was an incredible finish by the Packers who had no timeouts remaining late in the fourth. Rodgers who likes to go deep to his offense did just that with two plays to Adams while time ran out. Crosby kicked three field goals tonight and two were for 50+ yards.

The 49ers came out aggressive in the second half. They had their most successful drive which included 13 plays for 83 yards in 7 minutes. Garoppolo found Brandon Aiyuk for an 8-yard touchdown, that play put them back in the game down 17-14 to Green Bay.

“We had to play a lot better than we were,” Shanahan explained on what his message was during halftime. “I was pumped up to have the special teams kind of change that. It got us going a little bit, scoring right there before the end of the half. Then I knew offense had a chance to start with the ball. So, it was just big on them to go out and set the tone and go down and get a score to get this game back in reach. And they did that to start.”

But by the fourth the Packers extended their lead when Rodgers threw a 12-yard touchdown pass to M. Valdes-Scantling making it a 24-14 game. San Francisco answered every point made in the second half. However, they were unable to do this in the first half.

Trey Sermon rushed for a 1-yard touchdown trimming the lead down to 3 points. Then Crosby kicked a 38 yard field goal to give some breathing room for Green Bay. Then a brilliant drive by the 49ers gave them the lead for the first time tonight and great confidence they had this game in the bag.

After two incomplete passes by Garoppolo, San Francisco got the big play they desperately needed. Garoppolo made a short pass to George Kittle for 39 yards. Two more incomplete passes were thrown before Garoppolo connected with both Deebo Samuel and Kittle for a 12 yard pass each to setup Juszczyk’s touchdown to tie the game 28-28. Robbie Gould’s extra point put the 49ers ahead 28-27. With 37 seconds on the clock, no one saw what was coming next.

“Yeah. A lot of time,” said Rodgers. “We used a bunch of timeouts there in the third, fourth quarter. So we’re out of timeouts. But I felt good about the first play call, especially since [Green Bay Packers Head Coach] Matt [LaFleur] and I talked on the sidelines briefly during the last drive.

The play we made up at practice on Thursday, just one alteration on the route. Number two in the slot, which was [Green Bay Packers WR] Randall [Cobb] kind of clearing out the safely at the front side. When I came up, I just was thinking, first window on the deep end to [Green Bay Packers WR] Davante [Adams], but [LB] Fred [Warner] was there and so I kind of put it over his head. That obviously got us to the 50, which gave us the chance for a hail marry opportunity at the worst. Then we just needed one more, one more completion.”

San Francisco’s struggles in the first quarter allowed Green Bay to dominate. Rodgers went deep twice, in the first series he connected with Allen Lazard for 45 yards but the 49ers defenses held them to a filed goal, Crosby kicked a 54 yard field goal to give the Packers a 3-0 lead.

On the next series Rodgers went deep to Valdes-Scantling for 47 yards. He then found Adams for 14 yards then a 1-yard touchdown to make it a 10-0 game. Garoppolo went deep to Kittle to start the second quarter but Kittle was fully covered, Jaire Alexander intercepted the ball and rushed it back for 30 yards. San Francisco made a crucial stop on 4th down to prevent the Packers from going up  17-0.

“Obviously we are telling each other that we have to win this game,” Fred Warner said. “It is all on us and just taking it one play at a time. We obviously didn’t get it done.”

But a 32 yard pass interference penalty on the 49ers put Green Bay in good field position. By the two-minute warning, Aaron Jones rushed in for a 3-yard touchdown giving the Packers a 17-0 lead. San Francisco got some help when Green Bay was called for a pass interference late in the second quarter and that moved them closer to the goal line.

Trey Lance came in to replace Garoppolo, after the snap Trent Williams made a nice block that gave Lance enough room to get into the end zone for the 1-yard touchdown and end the half 17-7.

“It feels good, obviously, playing behind [T] Trent [Williams] and that whole entire offensive line,”said Lance. “They made it really, really easy. So obviously it was a lot of fun to get in the end zone at a time that we needed it.”