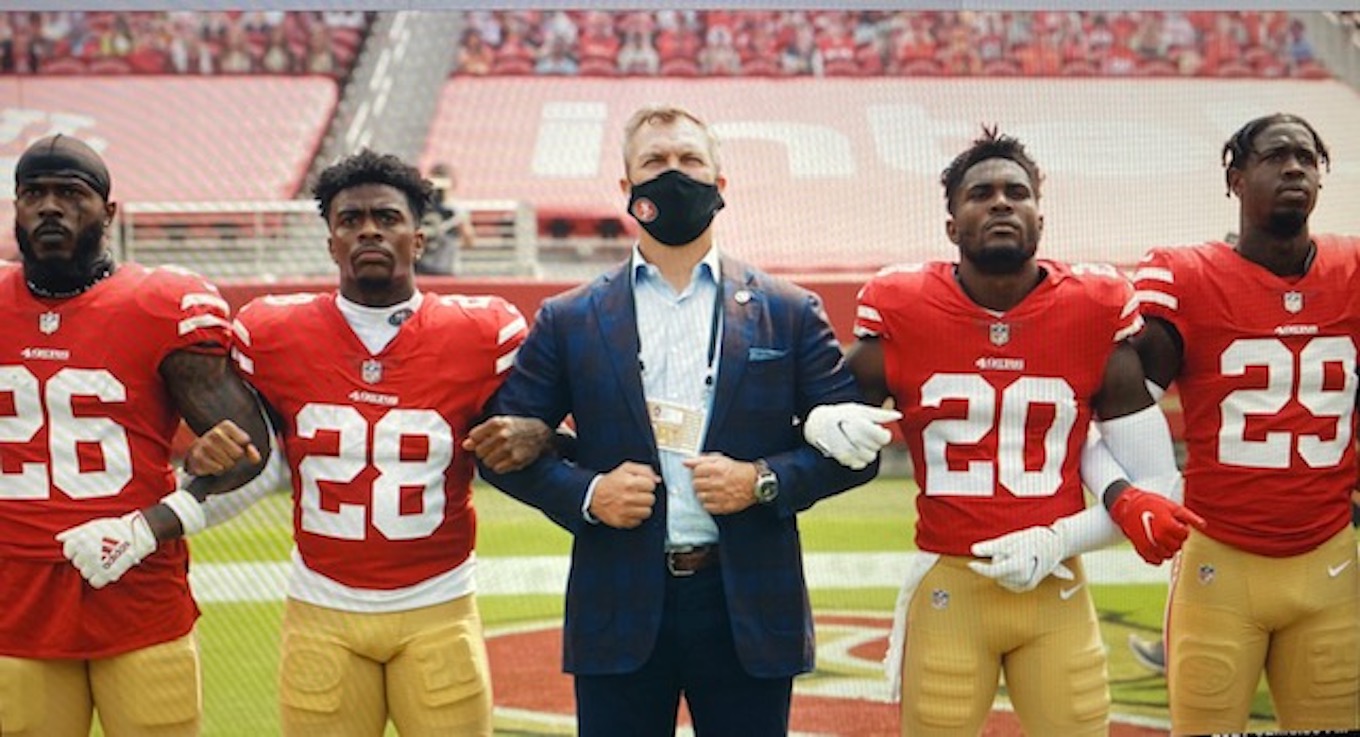 Tampa Bay – The wait is over…  After seven long years, he finally got the knock at the door.  Completely surprised former NFL player and now General Manager, John Lynch was at a loss for words for the first time.  As a football player it’s the “stamp of approval” you want to end your career but everyone doesn’t earn it and sometimes it takes so long you wonder if it’s ever going to happen.

When selected many tell their story through tears, laughter or comedy.  It’s the one platform you dream about to tell your story, your way.  If you’re one of the chosen, you become enshrined among the greatest to have ever played, coached or managed the game.

This year Lynch will join an elite 2021 class to enter the Pro Football Hall of Fame in Canton, Ohio this August.  A stellar football career led to becoming an analyst in the booth and then an Executive for the 49ers. Lynch gave everything he had on the field and now as an GM he contiues to achieve many goals in making San Francisco one of the best football franshices in sports.

“On behalf of my family and the 49ers organization, I would like to congratulate John on this well-deserved honor,” said 49ers CEO Jed York.  “He has achieved greatness throughout his NFL career and is a consummate ambassador for the sport.  John has certainly earned the right to be called a Hall of Famer and take his place in Canton among the all-time greats of the game.  Opponents knew him as a smart and physically intimidating player, while his coaches and teammates knew him to be a tremendous leader.  Over the last four years, John’s leadership has been instrumental in building a sustainable championship culture here with the 49ers.  We are so happy for the Lynch family as they celebrate this wonderful accomplishment.”

Lynch joined San Francisco’s organization back in 2017 as the General Manager and watched the 49ers make it to the Super Bowl last year only to lose to the Kansas City Chiefs.  That same year he was named the Pro Football Writers Association 2019 NFL Executive of the year.

John Lynch talks about the knock at the door.

Lynch was a ferocious Safety during his NFL career, he played ten seasons with the Tampa Bay Buccaneers and won the franchise’s first Super Bowl in 2002.  Lynch was one of five Safeties in NFL history to register at least 1,000 tackles, 25 interceptions, 15 forced fumbles and 10 sacks. He also was voted into nine Pro Bowls.

He shares this record with five other elite players, Charles Woodson (who was also selected into this years class), Rod Woodson, Rodney Harrison and Brian Dawkins.  Lynch played 15 seasons with the Buccaneers, Denver Broncos and New England Patriots.

“John Lynch didn’t just play the position, he occupied a spot in your mind and you had to be aware at all times where he was on the field,” HOF Barry Sanders said.  “John was as good as any safety I ever played against.  He reminded me a lot of guys like Ronnie Lott and Steve Atwater.  He was a terrific player, a great defender, a fierce defender. He could knock the snot out of you.”

George Kittle returns this Sunday vs the Cardinals December 24, 2020
Previous Post Curry’s big night not enough in Warriors loss to Mavericks
Next Post Raiders celebrate both Tom Flores and Charles Woodson induction into the Hall of Fame