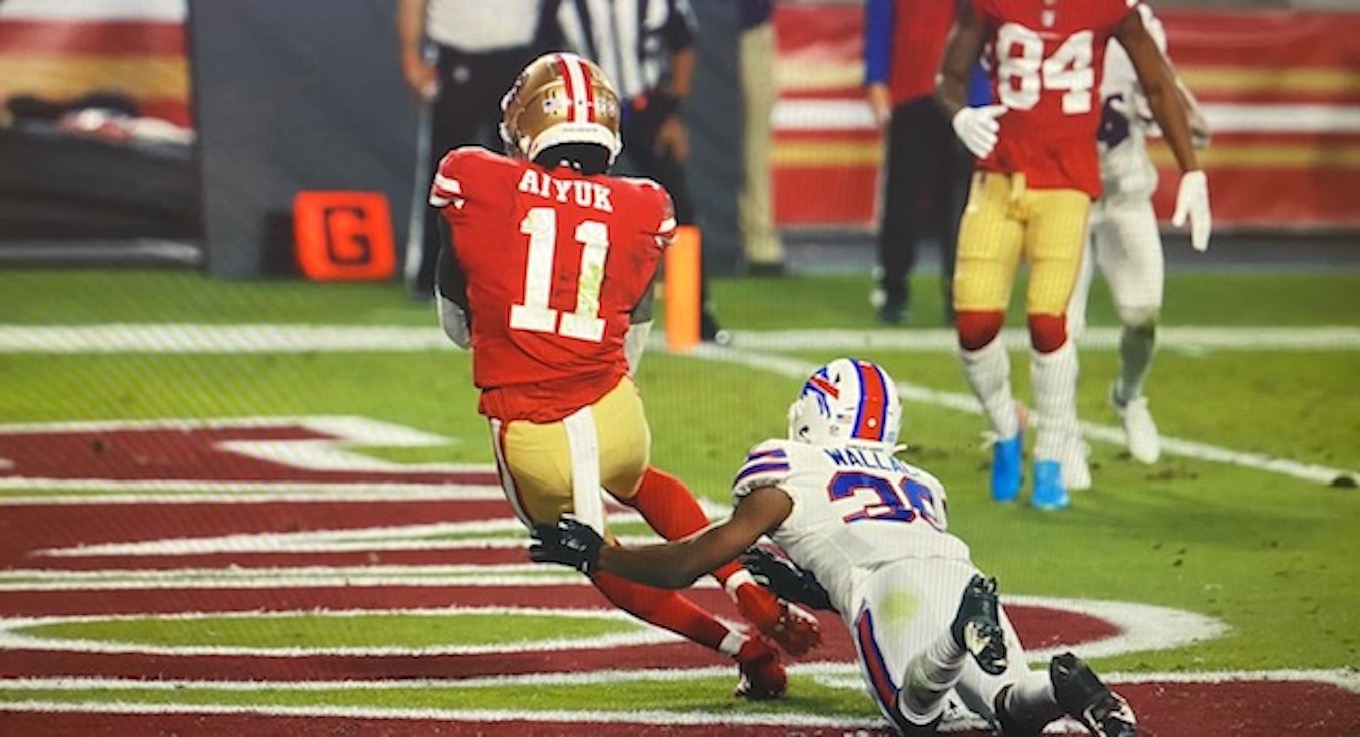 The 49ers played their first home game at State Farm Stadium in Arizona due to COVID-19 restrictions back in Santa Clara, California.  After a wild start, San Francisco’s defense collapsed while the Buffalo Bills dominated on both sides of the ball.  In the end, the 49ers suffered a 34-24 blowout loss to the Bills diminishing their playoff hopes with only four games left in the season.

“We’ve got four more games that we can account for, that we’re in charge of, and we’ve got to win all of them,” said 49ers head coach Kyle Shanahan.

On opening drive Kyle Juszczyk rushed up the middle for a touchdown but he was short of the goal line.  On fourth and goal, San Francisco went back to their rushing game but Buffalo’s defense held them out of the end zone.  On the next play, Bills quarterback Josh Allen fumbled the ball and the 49ers got it back.

Nick Mullens found Brandon Aiyuk in the end zone for a 2-yard touchdown and took an early 7-0 lead.  But by the second Allen threw two touchdowns while Tyler Bass kicked a 37-yard field goal.  A costly penalty by Arik Armstead led to a first down for the Bills, then Allen connected with Cole Beasley for a 5-yard touchdown to tie the game 7-7.

Allen found Dawson Knox for a 4-yard touchdown and Bass kicked a 45-yard field goal to end the half with the Bills up 17-7.  San Francisco never found their rhythm, Robbie kicked a 45-yard field goal to to start the third.  But Allen connected with Isaiah McKenzie for a 23-yard touchdown.  After a short pass from Mullens, Aiyuk fumbled the ball, Micah Hyde recovered and rushed for 33 yards.  The 49ers were able to make stops when needed and forced Bass to kick a 28-yard field goal making it a 27-10 game.

“Obviously, it didn’t work out well. I know that we did blitz sometimes,” Shanahan said.  “When we did blitz, he got away from it and made some big plays with some receivers running across the field. When we didn’t, he just dinked and dunked it and got after us, too.  We didn’t play our best on D.  That’s why we had to on offense and special teams and it was going to be one of those type games that was going to be a shootout and we missed a few.”

Mullen got bold and went deep to Aiyuk for 49 yards.  That setup Mullens 6-yard touchdown pass to Juszczyk to end the third quarter.  Juszczyk recorded his first touchdown of the season and 9th of his career. But Allen was always one step ahead of San Francisco’s defense.  He found a wide open Gabriel Davis for a 28-yard touchdown extending their lead 34-17 in the fourth.

With time running out, Mullens found Kendrick Bourne for the touchdown but Bourne was short of the goal line.  Mullens was penalized for the false start, then he threw a short pass intended for Wilson but was intercepted by Travis White.  Mullens and his offense recovered from their recent blunders when he found Jeff Reed for the 5-yards touchdown.