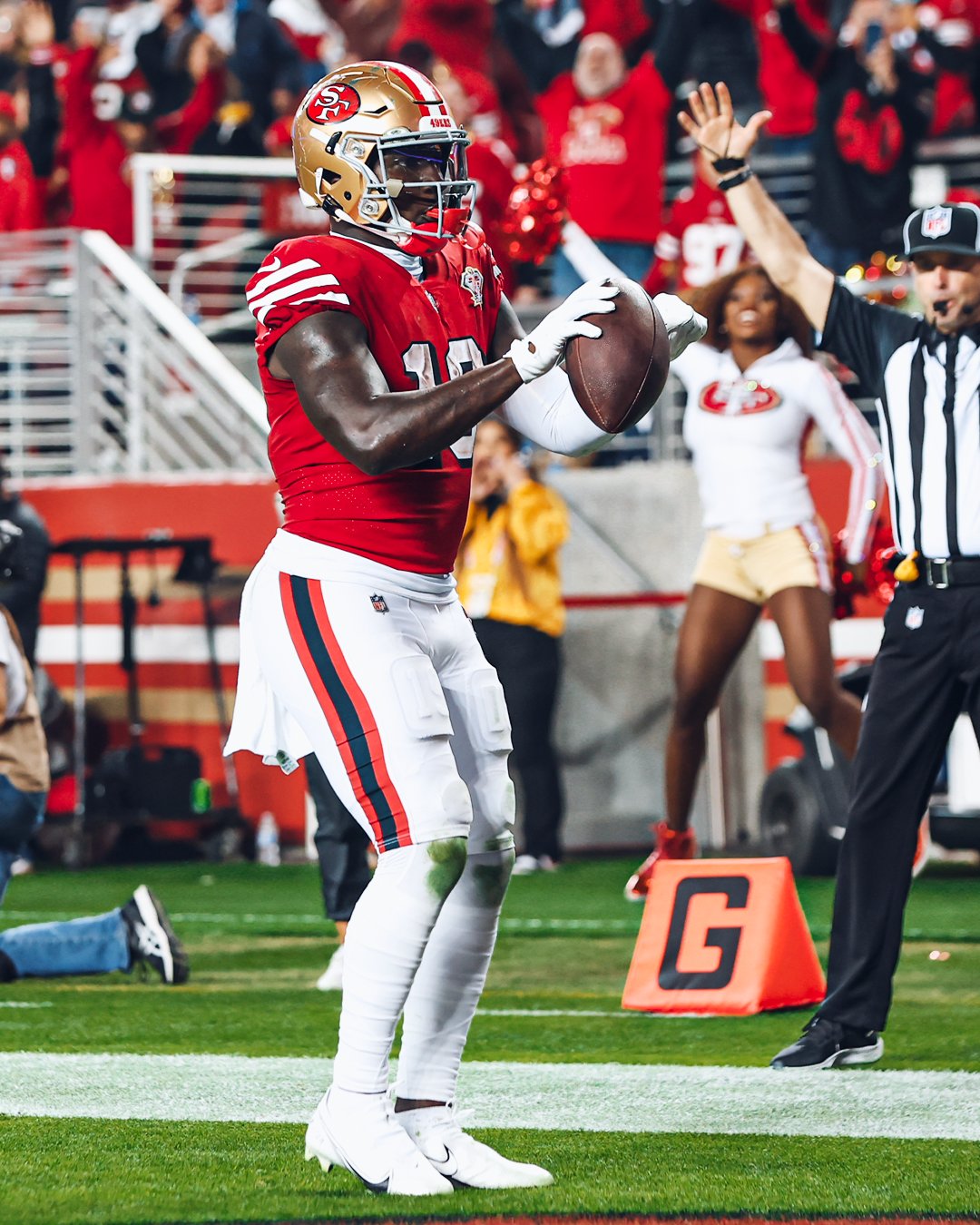 Santa Clara – The 49ers had nothing to lose tonight, two crucial turnovers led to two touchdowns that gave San Francisco their first home win in over a year. After a dominating 31-7 win over the Los Angeles Rams, they finally got the monkey off their back.

“That was huge,” head coach Kyle Shanahan said on Jimmy Ward’s interception. “We knew going into that game that we wanted to make it as physical of a game as possible. We felt if we did that, it would come down to the turnover battle. Them coming up with two was huge and us being able to protect it, I think was different than the game.

On opening drive for the Rams, Matthew Stafford went deep to Odell Beckham but his pass was intercepted by Ward who was wide open on defense. That led to long San Francisco drive that consisted of 18 plays and 93 yards, Jimmy Garoppolo connected with George Kittle for an 8-yard touchdown.

“It got us into a rhythm for sure,” said Garoppolo. “That’s the way we want to do it. Just running the ball, converting on third down and then score at the end. I don’t want to say it took their soul away but it definitely did something.”

Another turnover by the LA proved costly, Stafford’s pass was intended for Tyler Higbee and Ward was again, at the right place, at the right time again. He intercepted the ball for 27 yards for the touchdown making it a 14-0 game. Ward registered two interceptions in 11 minutes. It marked the first multi-INT game of his career and the second pick-6 of his career.

“Oh it was great. Man I feel great. I don’t even have words to talk about it,” Ward said.  “I guess that I can enjoy it for like 24 hours and then it’s onto next week. Jacksonville is coming up. We have to go on the road and get this win.”

The Rams only touchdown came early in the second quarter when Stafford found Higbee for a 10-yard touchdown. Deebo Samuel who scored twice tonight, hauled in 5 receptions for 97 yards and had 5 carries for 36 yards. Samuel rushed for an 8-yard touchdown late in the fourth.

The 49ers defense did their part and kept LA off the board to end the half. Robbie Gould kicked a 50-yard field goal. San Francisco continued to dominate for the remainder of the game. Garoppolo went deep to in Samuel in the fourth for a 40-yard touchdown to make it a 31-7 game.

For the fourth-down play, we called an in-breaking route and then just popped it wide open,” said Samuel. “As you can see, [49ers QB] Jimmy [Garoppolo] made the right read and it turned into a touchdown.

All my life I played running back.”

Facing elimination in the playoff race, the 49ers knew their backs were against the wall.  After losing four of their last five games, San Francisco had no know choice, they came out strong and finished strong. Shanahan made a high demand of 40 carries this game, and surprisingly the 49ers surpassed that goal with 44 runs for 156 yards.

“Our goal, we said 40,” Shanahan said. “Which I almost regretted, that’s tough to do, but I’m glad I said it now. So, they came through with it and it was a huge team goal and it worked out well enough that way that we could do it.”

They celebrated a great win and now it’s on to the next. San Francisco will head to Jacksonville next Sunday and will look for another victory to stay in this playoff race. The 49ers played excellent football on both sides of the ball and will look for that same energy for week 11.

“We got a short week,” said Shanahan. “I think we got a real good team [Jacksonville Jaguars] ahead of us. That’s how we expect to play. It’s been long overdue and we’ve got to make sure that we take a day off. Those guys rest, come back healthy on a short week, make sure we keep it going forward.”